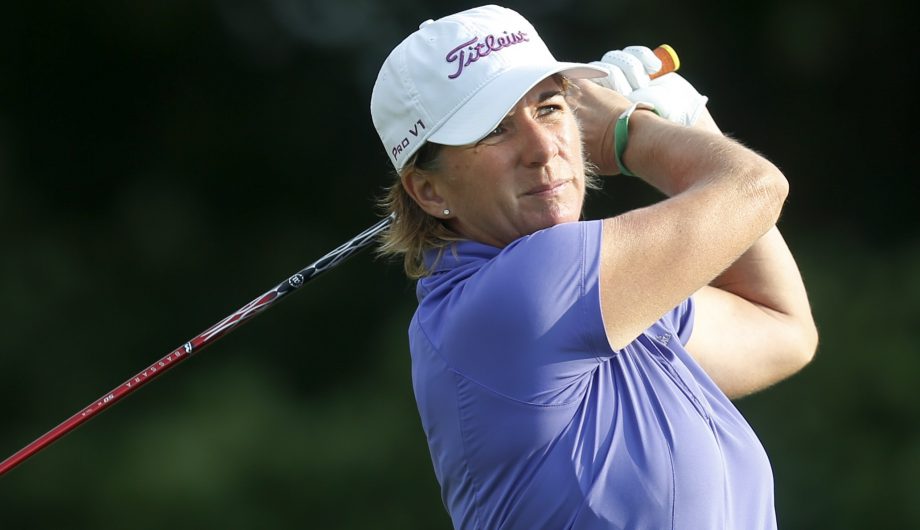 Wearing a violet shirt and a white cap under a blue-gray sky, Judith Kyrinis, of Canada, needed to make a 4-foot putt on Wellesley Country Club’s 18th green on Sunday to post a red number.

She missed, but the 52-year-old Kyrinis still earned medalist honors in the 55th U.S. Senior Women’s Amateur Championship with her second consecutive round of even-par 74 on the 6,049-yard Wellesley (Mass.) Country Club layout.

Kyrinis led by two strokes after the first round; her 36-her total of 148 was five strokes better than Kim Eaton and two-time champion Ellen Port.

“We all joke that you should four- or five-putt on the final green if you’re going to be the medalist,” said Kyrinis, the runner-up in the 2014 championship. “But I’m OK with it. It means I played well.”

Her joke was a reference to the difficulty that medalists have in going on to win the championship. The last medalist to win was Carol Semple Thompson in 2002.

Her challengers didn’t have such worries; they were more concerned with moving up the leaderboard and qualifying for match play. Eaton, 57, of Mesa, Ariz., had just one birdie in her first 30 holes.

“I just have a hard time making birdies on this golf course,” she said.

Eaton overcame that problem on the 446-yard, par-5 13th by making a 40-foot eagle putt from short of the green. She still may have had just one birdie, but she also owned the lowest round of the championship, a 2-under 72.

One of 13 national championships conducted annually by the United States Golf Association, 10 of which are strictly for amateurs, the U.S. Senior Women’s Amateur Championship consists of 36 holes stroke play followed by six rounds of match play, with the 18-hole championship match scheduled to take place on Thursday, Sept. 22.

The final four spots were determined by a six-woman playoff. Jen Holland, 53, of Branford, Conn., clinched the final spot by making an 18-inch putt in the gloaming at 7:04 p.m. EDT, well after the sun had set at 6:48.

“That was the longest foot-and-a-half putt I have made in my life,” said Holland as she received congratulatory hugs from fellow competitors.

Other players who had finished earlier had to wait longer to see whether they would be playing on Monday.

On the 18th hole, defending champion Karen Garcia, 53, of Cool, Calif., made a 6-footer for bogey that she approached as if it were a putt to win the championship.

“It might make the difference between me making the cut and not,” said Garcia immediately after shooting 84 for a two-round total of 163. “I was leaking on the way in.”

Pam Kuong, 55, of Wellesley Hills, Mass., also went lower in the second round, albeit not as dramatically as Leach. Playing in front of a hometown gallery, Kuong had difficulty judging the speed of her putts until her last five holes. She made birdies on four of them to shoot 78, six strokes better than her first round.

“There were neighbors, friends from work, clients of mine, fellow Charles River Country Club members, a bunch of other competitors from [Massachusetts Golf Association] events,” said Kuong, last year’s runner-up. “I went through a stretch where I had four-putts and three-putts, I was like, well, since my friends are still following me, I can’t give up.”

When Garcia, Leach and Kuong finished their rounds around lunchtime, they all thought their scores – 15-over 163 for Garcia, 18-over 166 for Leach, 14-over 162 for Kuong – would place them near the cutline.

They had different plans for Sunday afternoon. Garcia would practice her putting, Leach would watch football and Kuong was hosting a barbecue at her house for some of her fellow championship competitors. But all would have an activity in common.

“We’re all going to be following the scores on the computer,” said Kuong.

The leader board brightened for them as the afternoon progressed. When Kuong had finished at 12:20 p.m., she was tied for 62nd place. By the time play finished, she had moved into a tie for 30th.