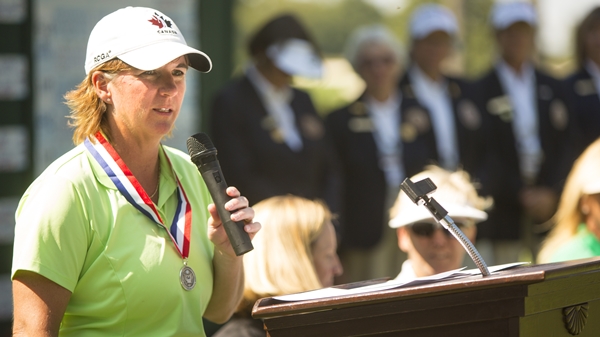 Higgins did not miss one fairway off the tee in the 18-hole final. She also came from behind on the inward nine against Kyrinis, just like she did in her quarterfinal and semifinal matches.

Kyrinis, 50, took the lead on No. 13 with a two-putt par after Higgins was unable to get up and down from the left greenside bunker. Higgins, who played collegiate tennis at the University of Wisconsin in the 1970s, split the middle of the fairway with her tee shot but came to rest in a grassy depression that left her with an awkward lie.

Higgins, who is not ranked in the World Amateur Golf Ranking, squared the match on No. 14 with a par. Her approach shot hit the flagstick and caromed 19 feet past the hole. Meanwhile, Kyrinis found the left rough off the tee and sent her second shot over the green, leading to a bogey.

The key hole turned out to be the par-5 16th. Both players were in perfect position in front of the green after laying up short with their second shots. Higgins struck her third shot to within 16 feet, but Kyrinis got under the ball with her approach and was well short of the putting surface. She eventually misfired on a 5-½ foot putt in an attempt to halve the hole.

“There are lots of different times during the match to think where I could have taken advantage that I didn’t,” said Kyrinis, a registered nurse in Toronto who was playing in her first U.S. Senior Women’s Amateur. “To move all over that little pitch shot was not very good.”

After each player bogeyed the par-3 17th after missing the green with their tee shots, Higgins closed out the match with a hard-working par on the finishing hole. She hit a 155-yard rescue club to the right fringe, while Kyrinis’ approach shot rolled through the putting surface and over the green. Higgins later converted an 8-foot putt.

Kyrinis, who defeated two past Senior Women’s Amateur champions in Mina Hardin (2010) and Terri Frohnmayer (2011) in the quarterfinals and semifinals, respectively, made a 10-foot bogey putt on No. 7 and a 3½-foot par putt on No. 8 to halve both holes and keep the match all square. She took the lead just before the turn on the par-4 ninth when she two-putted over a ridge and down a slope from 30 feet.

“The greens were pretty slick,” said Kyrinis, who reached the U.S. Women’s Mid-Amateur semifinals in 2000 and is No. 2,005 in the WAGR. “The pins were like every Sunday position I think they had out there. [I] felt like I was playing prevent defense.”

Higgins, who never got past the quarterfinals in seven previous U.S. Senior Women’s Amateur appearances and took out the No. 3 seed (Kyrinis), the No. 4 seed (Andrea Kraus) and the Canadian Women’s Senior Amateur champion (Helene Chartrand) on her way to the title.

Kyrinis, who held a 1-up lead on three occasions on the outward nine, was attempting to become the third Canadian to win this championship, joining Marlene Stewart Streit, a three-time champion, and Gayle Borthwick, a two-time winner.

All quarterfinalists are exempt from qualifying for the 2015 U.S. Senior Women’s Amateur Championship, to be played Sept. 26-Oct. 1 at Hillwood Country Club in Nashville, Tenn.

The U.S. Senior Women’s Amateur, for players 50 years and older, is one of 13 national championships conducted annually by the United States Golf Association, 10 of which are strictly for amateurs.