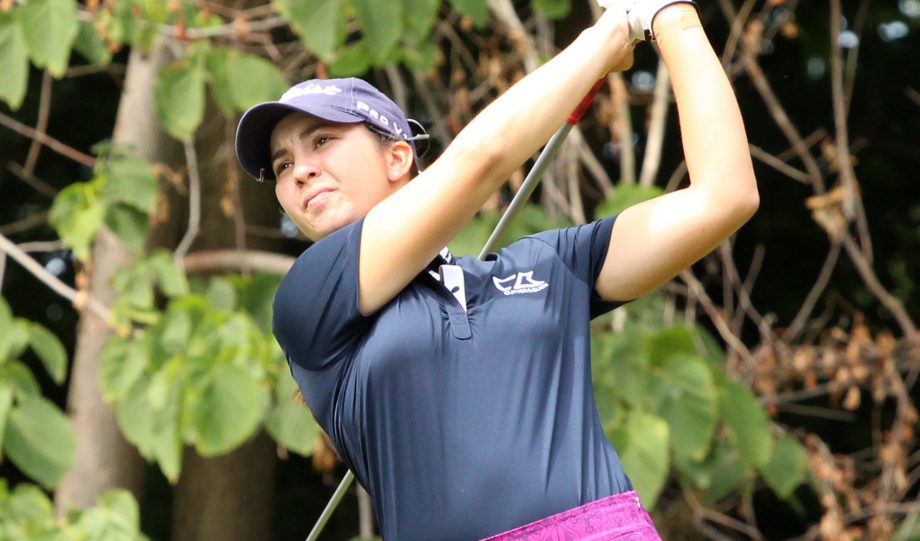 ROCHESTER, N.Y., – Therese O’Hara (Copenhagen, Denmark) played in a few pro-am events early in the week in Toledo, Ohio connected to the LPGA event this week. She didn’t arrive in Rochester until Tuesday before the pro-am party. Therefore, she only played nine holes and walked the other nine before tournament play. It seems to working as she posted a 3-under, 69 to move into a share of the 36-hole lead at 5-under, 139 on Friday at the Danielle Downey Credit Union Classic.

“Sometimes you make the preparation too big of a deal,” said O’Hara. “When you come on Monday and have Tuesday and Wednesday it becomes a lot. In college, you just came the day of the tournament and did a little practice and then go.”

O’Hara shares the 36-hole lead with Clariss Guce (Artesia, Calif.). Former Team Canada National Team member Brittany Marchand (Orangeville, Ontario), Nelly Korda (Bradenton, Fla.) and Madelene Sagstrom (Enkoping, Sweden) are one back at 4-under, 140. A total of 74 players made the cut at 4-over, 148.

O’Hara started strong with birdies on her first two holes, ten and eleven. She also birdied 15 and 16 to make the turn in 32. The former UNLV star moved to 7-under after her fifth birdie in 11 holes on number two. Unfortunately, she closed with two bogeys on eight and nine.

“It wasn’t an ideal finish, but in the wind it was a good round,” said a satisfied O’Hara. “I took advantage of the morning on the back nine when there was no wind and I was hitting it well. I made a 30-footer on 10 so that was a good start to the morning.”

O’Hara has been in contention before with eight career top 10 finishes including three this season, but is hoping this is the week she figures out how to close.

“Every time you are in contention, you learn from it,” said O’Hara. “It’s about not trying to think about the result, but it is hard because it is right in front of you. I’m still learning, but my game is really good right now. Every year I am getting better and my ball striking is the best it has been.”

O’Hara, who played on the LPGA in 2015, will go for her first career win over the weekend. The 28-year-old ranks 23rd on the Volvik Race for the Card money list and a win would likely jump her all the way into the top five.

O’Hara and Guce will tee in the final two-some on Saturday at 1:30 p.m.

CLARISS GUCE A SURPRISE NAME AT THE TOP: Clariss Guce (Artesia, Calif.) ranks 84th on the money list, but has a chance this weekend to vault up. She posted a 3-under, 69 to move from T10 to a share of the lead.

“I got off to a really quick start which makes the day a lot easier,” said Guce, who played college golf at Cal State Northridge. “I made some great putts and some great saves so I can’t complain.”

The highlight of her day came on 15 when her second shot, which was partial blocked by a tree, flew past the green, but she chipped in for birdie.

“I was thinking I’d be lucky to get away with par and then I made birdie,” said Guce. “Overall, I got in some tough spots, but my wedges got me through. My putter came through and made some pretty good bombs out there too.”

Guce and Mia Piccio are good friends and were smiling all day playing together. Guce said the pairing helped her.

“I had a great pairing, Mia is a good friend and we all just kept it light out there,” said Guce, who was also playing with Katelyn Sepmoree. “Everyone was playing pretty well so it was easy to feed off each other.”

After a T18 finish at the first event of the year and a T16 at the third event, Guce missed the cut in five straight starts from late April through June. She feels confident that her game is returning.

“I think my game is a lot better right now than it had been during the year,” said Guce. “Hopefully I can keep it going for the weekend, but it has been a good day.”

SAGSTROM STILL IN THE HUNT: Madelene Sagstrom (Enkoping, Sweden) had a tough first 12 holes on Friday. She made four bogeys including back-to-back on her second and third holes of the day and dropped down to 2-under. She recovered over her final six holes with two birdies to get to within one of the leaders.

“The wind bothers me a little bit,” admitted Sagstrom. “I felt like I hit a lot of good shots, but they just did not end up where I wanted them to and I got a little frustrated. It definitely affects me playing in this much wind.”

Sagstrom said “it was on her list” to get better at playing in windy conditions.

“I’ve worked a lot on my long game for wind shots so those don’t bother me as much anyone, but I definitely feel it on the green,” said Sagstrom. “My lag putting was really struggling today so that is the next step I really need to work on. It’s a guessing game for me on the green with the wind.”

“I found some good shots in the end and I made a really good birdie putt on eight so I was really excited about that,” said Sagstrom. “I finally felt like something went in so I’m in a good spot heading into the weekend.”

Sagstrom is looking for her third win of the season.

KORDA STAYS IN HUNT AND BATTLES WIND: Nelly Korda said it got so windy that at one point a 6-foot putt that she hit actually rolled back towards her. The 17-year-old, who joked about how thin she is and fighting to walk through the wind, grinded for a 1-under, 71 to stand in a tie for third.

“All you want to do on a day like today is play steady golf,” said Korda. “All you are really focusing on is pars, pars and more pars.”

Korda is in contention for the second time this season. She was in a tie for second heading into the final-round of the Four Winds Invitational and finished in a tie for fourth, her best result of the year.

“I’m not really thinking about where I am on the leaderboard,” said Korda. “The conditions today were brutal so coming in with an under-par score is definitely a confidence booster.”