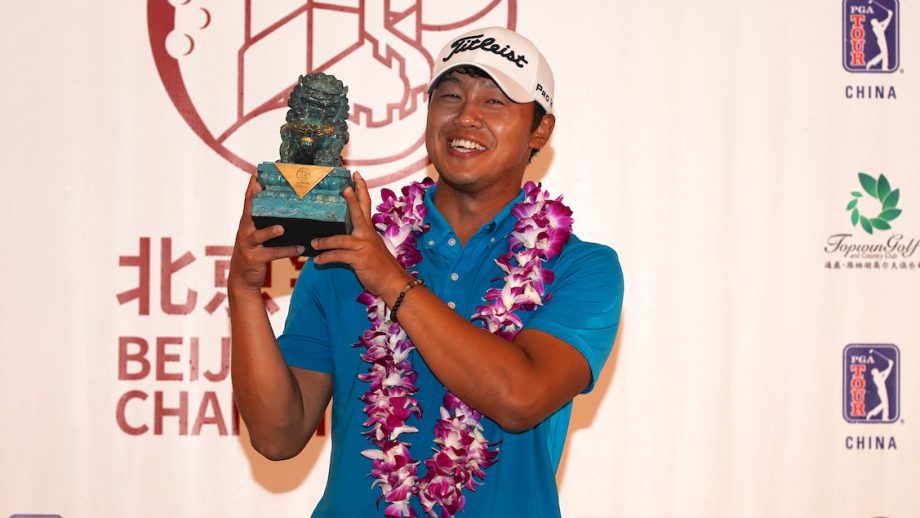 Jung, 26, entered the day tied for the lead with American Max McGreevy. He took the lead for good when he birdied No. 4 and never let up, picking up four more birdies and one bogey to finish with a 19-under total of 272 at Topwin Golf and Country Club.

McGreevy earned his third top-five in four Tour events after carding a 71 to finish third at 16-under along with Chinese Taipei’s Chiehpo Lee (66).

The former Canadian Boys Golf Championship winner (2010) was steady all day, starting with three straight pars before finding his rhythm. In addition to his birdie at the fourth, he picked up birdies on holes 6, 10, 12 and a birdie on 15, a hole where he initially thought he had lost his ball.

“Hole 15 was crucial. I hit it way left, and if I hadn’t found that ball it would have been a different story,” said the Korean-born Jung. “I was just under a tree and somehow made birdie. I had 30 yards to the pin and was able to hit a really good shot and roll the putt in.”

In just his second Tour event of the season, Jung was thrilled with the way he handled himself to hold onto the lead and earn his first Tour title since winning the Suzhou Open in June of 2018.

“I tried to not think about what the other players were doing. If they play great, it’s not my day. But I really didn’t want to make mistakes and give away the W,” said Jung. “So I’m just really happy with how I played, especially down the stretch. I had some clutch putts and was able to roll the rock, which was great”

Now Jung is excited to have a chance to improve on a solid 2018 where he missed out by one spot on a trip to Final Stage of the Web.com Tour Qualifying Tournament when he finished 11th on the Order of Merit.

“I feel amazing, 19-under par on any golf course is always a great score so I’m just really happy with that,” said Jung. “Now I don’t have to think about finishing top 10 [on the Order of Merit] as much, so hopefully I can just keep doing what I’m doing now and just play some good golf.”

CHAMP! #TeamCanada alum Richard Jung collects his second @pgatourchinaofficial career win with a 2-stroke victory in #Beijing 🇨🇦🏆 – The win marks the second straight for #Canada in this event (Peter Campbell won it in 2018)

Ree, who finished 26th on the 2018 Order of Merit, was disappointed not to get the win but the San Diego State University graduate is already optimistic and looking forward to the upcoming events.

“I didn’t play as well today as the last three days, but in the end I’m pretty happy with how I finished. I birdied three in a row coming in so can’t be too disappointed,” said Ree, who like Jung, also has Korean parents. “There are a few more events before we take a break, so hopefully I can get the job done soon.”

The Beijing Championship was the first event of a three-week swing. The next two tournaments are the Qinhuangdao (May 13-19) and Nantong Championships (May 20-26). Following two weeks off, the Tour will resume with the Suzhou Open (June 10-16) and Huangshan Championship (June 17-23).