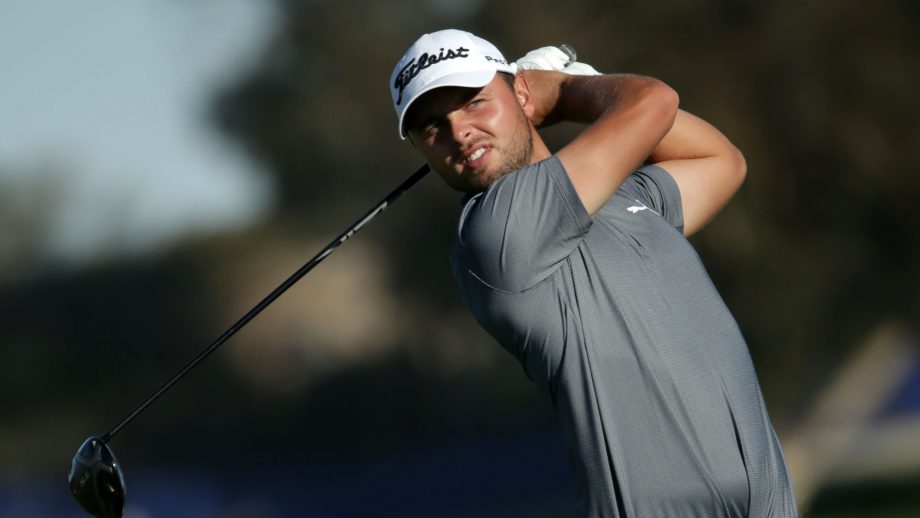 SAN DIEGO – Justin Rose tracked the flight of his 3-wood until he saw it splash into the pond guarding the 18th green at Torrey Pines. He walked a few steps and pulled his cap down over his eyes, the look of a man who had just made a crucial mistake at the wrong time.

This was only Saturday.

Rose wasn’t happy that he finished up the third round with a bogey at the Farmers Insurance Open, but it didn’t take away from a game so strong that having his lead cut in half over the closing five holes was no cause for alarm.

Even with three penalty shots on the day, Rose still managed a 3-under 69 and a three-shot lead, the same margin with which he began the day.

Adam Scott had the low round of the week on the South course with a 65, which pulled him within three shots and it still felt like a consolation.

“As good as I’m playing, I feel like I’m a long way behind,” Scott said.

Rose had six birdies and an eagle that more than atoned for his mistakes. Even with two double bogeys and the bogey on the par-5 18th, he still matched the 54-hole tournament record at 18-under 198, last set by Tiger Woods in 2008.

As for that bold attempt to go for the green?

He had an 8-iron from the first cut of rough to play it safe until he saw Ryan Palmer comfortably reach the green. Rose went to the 3-wood, knowing it could come out heavy, and that’s what it did.

“There was a long way to go,” Rose said. “So I wasn’t really playing with the lead in mind at that point. If I was running 30th in the tournament, that was a shot I would probably hit. But yeah, it didn’t work out.”

Jon Rahm had a 68 and was four shots behind, followed by 22-year-old Doug Ghim, the former No. 1 amateur playing this week on a sponsor’s exemption. Ghim shot a 67.

Woods had the biggest gallery and didn’t make much noise. Woods birdied three of his last five holes to salvage a 71, leaving him 13 shots behind and in search of moral victories in his 2019 debut.

“I think if I can get to double digits (under par), it would be just a nice way to end the week,” Woods said. “I’ve got to play a little better than I have.”

Scott was the only player to give Rose a serious run, and it didn’t feel like much.

Starting the day seven shots behind, Scott opened with an 8-foot birdie and then holed out from 103 yards for eagle on the next hole. He added four birdies in a five-hole stretch at the turn and delivered the low round of the tournament on the South course.

And he still wondered if it was enough.

“It’s almost all up to him tomorrow,” Scott about Rose, his neighbour in the Bahamas. “So that’s no pressure on me. But this is not a course I can go out and just fire at pins. It’s too easy to make big errors. I’ll just have to chip away and see if he can do the same.”

Rose made plenty of errors, though he atoned for them with plenty of exquisite shots.

After starting with two birdies through three holes, Rose pulled his shot from a fairway bunker on the fourth hole into the hazard well left of the green, and he missed a 10-foot putt to make double bogey. He answered with two birdies and an eagle on the par 5s, reaching all of them in two, and appeared to be sailing along until he pulled his shot out of a bunker on No. 14 into the hazard for a second double bogey, and then found the water on the final hole.

Scott said he would not be thinking about winning overnight, not with Rose the player he is chasing.

Rose is No. 1 in the world, with five victories in the last 14 months and a game that is not showing many weaknesses.

“He’s just playing too good,” Scott said. “He’s the No. 1 player in the world, he’s played well for over two years. He’s feeling it. He wants to take advantage of all of his good golf and that’s why he’s running away with this thing.”

Scott said the one positive about his position is only one player is front of him.

Rose has a 3-6 record when he has the lead going into the final round on the PGA Tour, and he knows now to take anything for granted, even the way he’s playing on a strong South course. Rose and Scott are longtime friends, while Rahm won at Torrey Pines two years ago and has an explosive game, opening this event with a 62.

“I expect Jon and Adam to come out and play well tomorrow, as well as the chasing pack,” Rose said. “But one of those guys is capable of something in the mid-60s. Obviously, if I go out and shoot 68, then that’s a great round of golf.But a 68 on the South course isn’t anyone’s to lose. You have to go out and get it. I think it’s going to take a good round of golf tomorrow to get this done.”