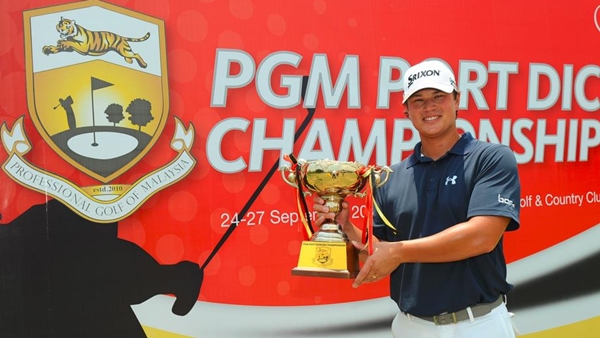 Coming from five shots back, Yip recorded an eagle and seven birdies against a lone bogey to top Malaysian Khor Kheng Hwai, who also signed for a 63, with a 20-under-par 264 total at the Port Dickson Golf and Country Club.

Yip, who secured his Asian Tour card at Qualifying School earlier this year, was delighted to emerge victorious in his first appearance on the ADT, which was launched in 2010 as a gateway to the Asian Tour.

“I woke up feeling confident that I can have another go in chasing for the win. I wanted to have a good showing this week to put my game in good shape ahead of next week’s event. I’m glad I managed to do it,” said the 29-year-old Canadian, who walked away with the winner’s prize purse of US$10,812 and six Official World Golf Ranking (OWGR) points.

“I wanted to play on the Asian Tour because I know it is a good platform for me to boost my world ranking with the OWGR points on offer. I’m looking forward to going back to play on the main Tour. Hopefully I can extend my good form into next week’s event,” added Yip.

Despite missing out on his maiden win by a mere one shot, Khor soaked in the positives as he posted his career’s low round and best finish on the ADT.

“My putter worked wonders today. I putted really well today, in fact for all four rounds this week. I have nothing to lose despite missing out on the win. It was a pretty amazing week for me,” said the 29-year-old Malaysian.

Meanwhile Arie, who led in the first three rounds, will have to wait longer for his maiden victory as he failed to fend off his fast-charging rivals.

The young Malaysian reeled in nine straight pars but hit his drive out-of-bounds on the 10th hole which resulted in a triple bogey. He dropped a shot on the 13th hole but recovered with three birdies in his last five holes.

Since its inauguration in 2010, the ADT has grown from five events in the first year to a record 20 tournaments in 2014. The top-five finishers on the Order of Merit at the end of the season will earn Asian Tour cards for 2015.