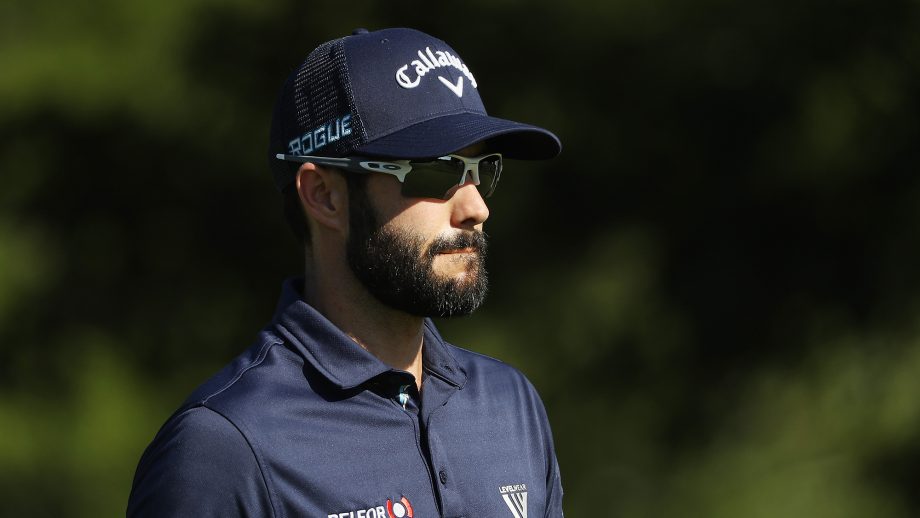 NORTON, Mass. – The putt is one that Webb Simpson never practices enough. He wasn’t sure it even required his putter.

He worked it to perfection.

From just over 70 feet away off the green on the par-5 18th, Simpson rolled in the eagle putt for an 8-under 63 to take a one-shot lead Saturday at the halfway point of the Dell Technologies Championship.

“You just kind of laugh at those because you’re not trying to make them, you’re just trying to get them close,” Simpson said. “The grass around the greens is firm enough to where the ball runs pretty smoothly. I didn’t like my lie to chip it. I decided to putt it, and it came off really nice, just how I wanted it.”

A gorgeous Saturday in New England allowed for low scoring at the TPC Boston.

Tyrrell Hatton of England had eight birdies with his store-bought putter for a 63 and was one shot behind, along with Justin Rose (67). Tommy Fleetwood made it a trio of Englishman near the top with his 65, leaving him three shots behind.

Tiger Woods got into the act, too.

Woods only once came close to bogey, making a 12-foot par putt on the par-3 11th hole, and gave himself ample opportunities in his round of 66. It was an important day to move forward with conditions ripe for scoring, though he still was seven shots behind Simpson.

“I’ve got some work to do still,” Woods said. “This is a golf course you can’t sit still on. You have to keep making birdies. You have to keep getting after it. Conditions are going to be like this the rest of the weekend. You’re going to see plenty of birdies out there.”

Simpson was at 11-under 131, worth little more than pole position going into the final two days before the Labor Day finish.

Adam Hadwin, the lone Canadian in the field, sits in a tie for seventh at 6-under. The Abbotsford, B.C., native was 5-under for the day through 10 holes before two bogeys on the back nine left him with back-to-back 68s.

Ten players were assured of their season ending by missing the cut, meaning they will not finish among the top 70 to advance to the third event in the FedEx Cup playoffs next week outside Philadelphia.

Simpson, who won The Players Championship in a landslide in May, is at No. 9 and already assured of being among the top 30 in the Tour Championship.

He is more interested in doing well enough, often enough, to be consistently among the elite.

“I don’t want to just have a couple of good years and have it go away for two years,” Simpson said. “There are a few guys that are always top 10 in the world. I want to do that.”

A lot of those guys are still in the hunt at the TPC Boston.

Jordan Spieth showed signs of getting on track, despite opening with two straight bogeys. He ran off four birdies in a five-hole stretch after making the turn, and saved par from a bunker on the other, and had a 67 to be in the large group at five shots behind.

Dustin Johnson, the world’s No. 1 player, missed several birdie chances and shot 69. He was six behind.

Hatton is riding a hot streak with his $149 putter that he bought last week before the final round at Ridgewood Country Club.

Well, the putter his caddie bought. Hatton wanted to shake up his short game, but the equipment trucks had already left and he was too embarrassed to be seen in a golf store shopping for a new putter, even if not many in Paramus, New Jersey, would have recognized him.

His caddie headed to a Golf Galaxy store, using a video app so Hatton could look at the options.

“Obviously, he made a good choice,” Hatton said.

Abraham Ancer of Mexico was poised to get within one shot until he chipped across the 18th green and into a bunker, and then missed a 4-foot par putt and had to settle for a 69 that left him three shots off the lead, along with Cameron Smith of Australia (66).

It’s a big week for Ancer, who is No. 92 in the FedEx Cup and needs to move into the top 70 to advance to next week outside Philadelphia. After that, the top 30 make it to the Tour Championship for the FedEx Cup finale.

“I don’t play well, I’m not playing any golf next week,” Ancer said. “I’m not trying to put any extra pressure. I know what I need to do. And I just need to execute my game plan and it will be fine.”

Tony Finau had five birdies over his last eight holes for a 68, which might help his cause involving another cup – the Ryder Cup. U.S. captain Jim Furyk makes three of his four wild-card picks on Tuesday, and Finau entered the equation with a runner-up finish last week.

Rafa Cabrera Bello of Spain didn’t hurt his chances, either. The four European selections are Wednesday. Cabrera Bello chose to play in the FedEx Cup playoff event at the TPC Boston instead of going to Denmark with one last chance to qualify. He had another 68 and was at 6 under, which is sure to get the attention of European captain Thomas Bjorn.