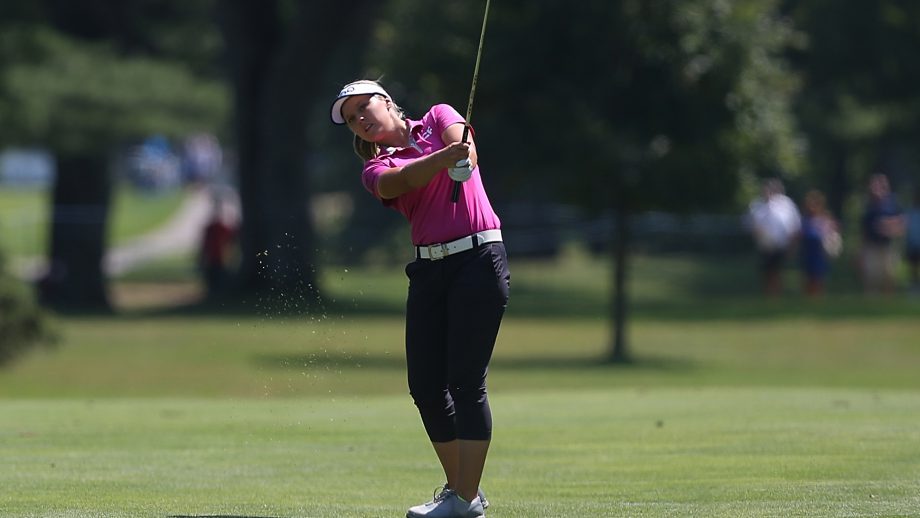 SYLVANIA, Ohio – Canadian Brooke Henderson has struggled in her past two appearances at the Marathon Classic.

The 20-year old from Smiths Falls, Ont., finds herself tied for the lead after two rounds of the tournament following a bogey-free 5-under par 66 on Friday to move into a tie with Caroline Hedwall. Both are at 9-under 133 through 36 holes.

“It’s just fun to be in contention again and to see your name at the top of the leaderboard, it’s exciting, and hopefully good things will happen,” Henderson said.

Henderson, who won earlier this season in Hawaii and has six career victories, missed the cut last year at Highland Meadows and finished tied for 38th in 2016.

She shot a 3-under 31 on the front nine and then birdied the final two holes, both par 5s, to move into a tie with Hedwall.

“To finish birdie-birdie was really important, and it’s fun to see your name at the top,” Henderson said. “I’m excited to be in the final group.”

Hedwall, who played in the morning on Friday, is looking for her first LPGA Tour victory. This is the first time since the 2015 Handa Australian Open that she has held the lead after 36 holes.

“I’ve been in this situation, and I mean, it was a long time ago, though,” said Hedwall, who shot a 4-under 67 on Friday. “I’m just looking forward to the weekend. This is obviously what you practice and work hard for, to be in contention.”

The 29-year-old Swede has matched a career high for the lowest 36-hole score of her career, which was in Australia. Like Henderson, she also birdied the last two holes to move to the top of the leaderboard.

Thidapa Suwannapura was one shot back and defending champion I.K. Kim was three strokes behind.

Brittany Marchand of Orangeville, Ont., is 4-under after a second-round 68 while Hamilton’s Alena Sharp is even. Maude-Aimee Leblanc of Sherbrooke, Que., missed the cut at 1-over.

Sei Young Kim, who shot an LPGA Tour-record 31-under to win last week’s event in Wisconsin, was eight shots back after a 1-over 72 on Friday.

Daniela Darquea had a hole-in-one on No. 6 from 169 yards out. She joins Nasa Hataoka as the only players on the tour this season to record multiple aces.