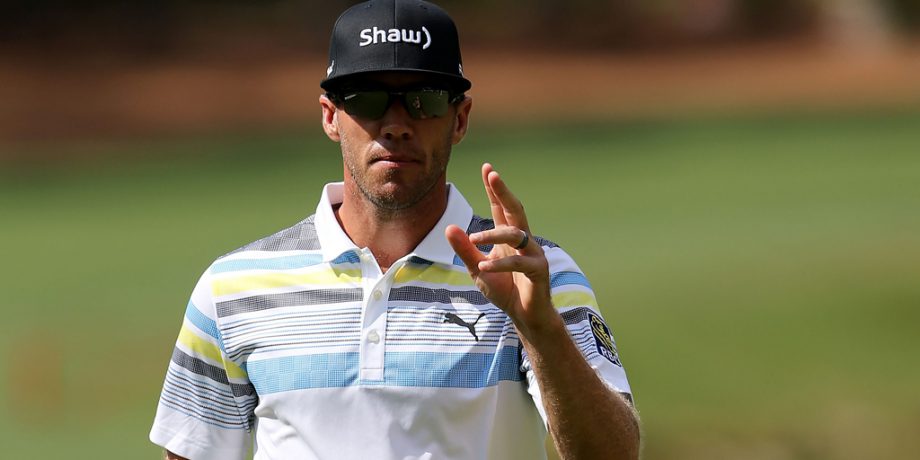 HILTON HEAD ISLAND, S.C. – Canadian Graham DeLaet always loved playing at Harbour Town Golf Links, but rarely got the results he thought he should – until this week.

The Weyburn, Sask., native followed up his career-best 6-under 65 in the first round with a 67 on Friday to share the lead with Luke Donald midway through the RBC Heritage.

Donald also shot 67 to reach 10-under 132, two in front of Ian Poulter and Webb Simpson.

Poulter and Simpson each shot 68.

DeLaet was 1 over on his first seven holes of the second round until a birdie on the difficult par-4 eighth hole and an eagle on No. 9, also a par 4 where he bounced his approach shot into the cup.

DeLaet had never finished better than 14th in six previous trips here and had only twice broken 70 in his last 10 rounds before this week. DeLaet said his top-15 finish a year ago – his first and only one – continued to fan his flame for Harbour Town. “And my love and enjoyment of playing this golf course turned into, ‘Maybe I could play well here,”’ he said.

DeLaet plodded through the first part of his round until dropping his approach on the 461-yard eighth hole within 15 feet and made the putt. On the next hole, DeLaet sent a wedge from 109 yards out into the green, simply hoping to spin it back left toward the pin. Instead, it hopped in the cup to put DeLaet out front.

“We couldn’t see the bottom of the pin, but there was reaction from the crowd so we figured it was in,” DeLaet said.

Donald, DeLaet shine in Round 2 from Harbour Town. pic.twitter.com/FwO28jhNFE

DeLaet has won four times worldwide (three in his home nation and once in South Africa), but has never done better than three second places (the last in the 2014 Waste Management Phoenix Open) on the PGA Tour. DeLaet doesn’t plan to change his approach with a big weekend ahead. “I’m looking forward to not getting up at 4:45 a.m. again like I did this morning,” he said with laugh.

Donald has finished second or third in six of his past eight visits to the RBC Heritage – and put himself in position for another stellar finish this time, too. Donald’s round took off with three straight birdies on the front nine. He held off a spate of wild drives after the turn – Donald drove way right on No. 10, played a provisional, found his first ball and made par – before chipping in for birdie on the closing, lighthouse hole at No. 18.

It was the second straight day Donald made birdie at the iconic hole. He’s shot in the 60s in 21 of his 42 career rounds here. About the only thing he hasn’t done is win, something he looks to remedy this week.

“I’ve been in this position before and I’ve got to go out there and be aggressive and make some birdies,” Donald said. “Certainly playing for pars won’t get it done out there.”

Poulter, playing on a major medical extension, is on the clock to keep his card and needs about $145,000 in his next two events to maintain his playing status and is off to a strong start. His 66-68 is the just the second time in seven career visits to Harbour Town he’s opened with two sub-70 rounds. His eligibility? Not on his mind at all. “I’m playing golf like I really don’t care, to be honest,” he said. “I’ve had to work on clearing everything out of my mind to go play good golf.”

Simpson, the 2012 U.S. Open champion, continued his strong play at Harbour Town’s first nine, notching four more birdies to go along with the five straight he made there in the opening round Thursday.

First-round leader Bud Cauley followed his 63 with a 72 and was in a group of five at 7-under that included former PGA Championship winner Jason Dufner and Sam Saunders, the grandson of golf’s late king, Arnold Palmer.

Kevin Kisner had the round’s best score, a 7-under 64, and was among six players four strokes behind the leaders.

Nick Taylor and Adam Hadwin, both of Abbotsford, B.C., shot 66’s. Taylor was 7 under while Hadwin was 5 under.

There were 74 golfers who made cut of 1-under par – anyone over par or even was leaving – which was lowest cutline ever at Harbour Town. Those going home included Jim Furyk, Ernie Els, 2016 Masters champion Danny Willett and Charley Hoffman, who contended at Augusta National for much of the week before falling off the pace.