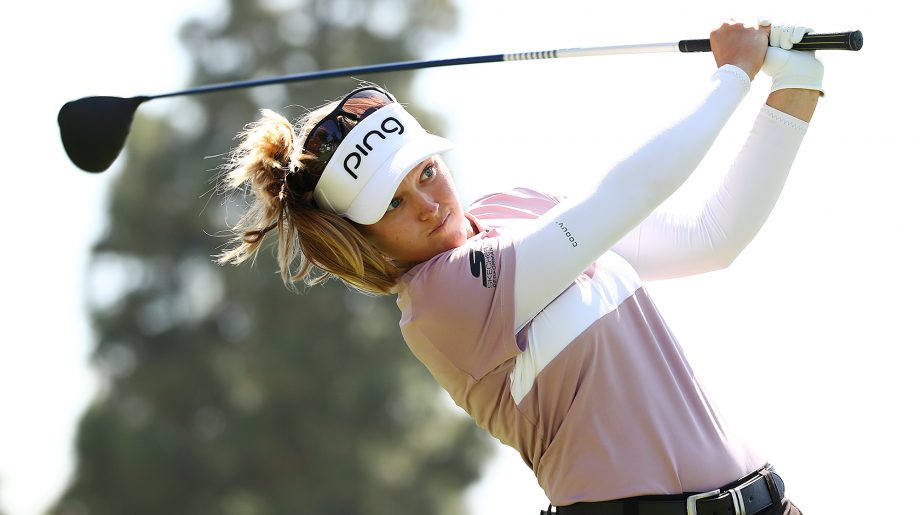 LOS ANGELES – Worn out after two long nights with infant daughter Chesnee, Stacy Lewis shot a 6-under 65 on Thursday for a share of the lead with Hannah Green halfway through the first round of the Hugel-Air Premia LA Open.

“I’m looking forward to get a little rest,” Lewis said. “Really with the baby it’s different every day. She could be in a great mood and all of a sudden she’s screaming and you don’t know why. And we’re getting teeth, so it’s just the age that she is.”

The 34-year-old Texan is making her sixth LPGA Tour start since Chesnee’s birth in late October.

“My mom was here. She left on Monday,” Lewis said. “My husband (University of Houston women’s golf coach Gerrod Chadwell) is coming in tonight. I wanted to just kind of see how was it by myself for a couple days, and she chose to have her worst night in months right after my mom leaves.”

She birdied four of her last six holes in the bogey-free round at Wilshire Country Club.

“I hit it good and putted well,” Lewis said. “That’s kind of the combination that’s been missing, is just putting both of them together. Finally did it on the same day.”

“Last year it was super firm and so I did not like the golf course,” Lewis said. “Just felt like you didn’t get rewarded with good shots, and it was a little bit of goofy golf. Now the greens are much more receptive and you can just hit a lot better golf shots. They’re still difficult to putt, but I just feel like you get rewarded more for good shots.”

“It was nice playing with Inbee,” Lewis said. “I hadn’t played with her in a while. I love playing with her because she hits so many good putts. Kind of get some confidence just seeing the ball roll really well.”

Inbee Park had a 68. The second-ranked Sung Hyun Park shot 76.

Green also had a bogey-free round.

“My ball-striking was great, but also my putter was really hot,” Green said. “I was really happy with how I rolled it. … I think whoever wins this week will have the least amount of putts.”

“It was pretty solid all round,” said Lee, ranked fourth. “I just hit the greens and then if I was close, I would try and take opportunity of my birdie chances. If not, then I would be able to have a par.”

Top-ranked Jin Young Ko played in the afternoon. She’s the only player with multiple victories this year, taking the Founders Cup in Phoenix and the major ANA Inspiration in Rancho Mirage.

All smiles for last week’s champ, @BrookeHenderson. She’s back in contention with 3-under 68 to share 5th place @lpga_LA 👌🏼🇨🇦

Fellow Canadian @ACTanguay leads the way at 4 under par 🍁 pic.twitter.com/6moYE6eRHu

Jessica Kordahad a 74, playing a four-hole stretch in 5 over with three straight bogeys and a double bogey.

Sixth-ranked Lexi Thompson also struggled, shooting 75. She was 5 over in a five-span, also making three bogeys and a double bogey.