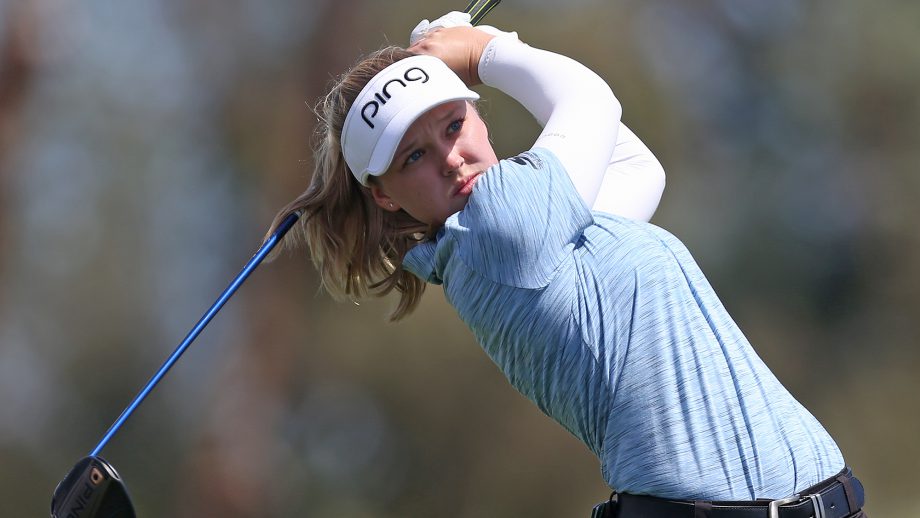 RANCHO MIRAGE, Calif. – Jin Young Ko won the ANA Inspiration for her first major title, celebrated with the traditional winner’s leap into Poppie’s Pond and will jump to No. 1 in the world ranking.

The woman who said this year that her goal was to be the happiest player on the course was thrilled about the first two.

She wasn’t all that excited about the No. 1 spot in the world.

“I just try to focus on my game on the course,” Ko said. “It doesn’t matter about world ranking. I don’t like numbers like No. 1 or No. 2. I’m just playing on the course.”

She did that better than anyone else over four days on the Mission Hills course made more difficult by thicker rough, tighter fairways and some longer holes. On Sunday, the 23-year-old South Korean closed with a 2-under 70 in hot and mostly calm conditions for a three-stroke victory over Mi Hyang Lee.

“If ball goes right or left it doesn’t make me happy, but I’m still trying to be happy,” Ko said. “Also, I really try, don’t think about future, doesn’t matter. Just focus on my swing, on the putting. That’s why I win this week.”

“Yesterday was a little bit hard for me,” Ko said. “I’m not robot. We are human.”

Ko won for the fourth time on the LPGA Tour, completing a desert sweep after taking the Founders Cup two weeks ago in Phoenix. She leads the money list and has five top-three finishes in six events this year.

Is she surprised by her start?

“No, no, no,” Ko said. “I had really hard practice in winter training off-season in Palm Springs.”

Ko gave caddie David Brooker his third victory in the event. The Englishman also leaped into Poppie’s Pond with Grace Park in 2004 and Lorena Ochoa in 2008.

“He knows this course,” Ko said. “He helps me all the time on the course. So really say thank you for my caddie.”

Lee parred the final six holes in a 70.

“This is really good momentum for me,” said Lee, also from South Korea. “I’m so happy with this week.”

Ko had a three-stroke lead at the turn and faced little pressure until stumbling with the two bogeys. Her drive on the par-4 13th jumped into the thick right rough and her long approach ended up short of the green in the left rough. After missing a 12-foot birdie putt on the par-3 14th, she hit into the left greenside bunker on the par-4 15th and missed a 12-foot par try.

“I had couple miss shot, but I think it will be fine,” she said.

Lexi Thompson was third at 6 under after a 67.

“My caddie, Benji (Thompson), helped out tremendously,” Thompson said. “I was getting down a little bit, but he just kept me right in there playing aggressively the whole day – making those birdies and just firing at every pin I could.”

Kim closed with a 74 to tie for fourth at 5 under with Carlota Ciganda. The 30-year-old South Korean lost a chance to win the event seven years after missing a 14-inch putt on the final hole of regulation and losing on the first hole of a playoff.

Ciganda finished with a 68.