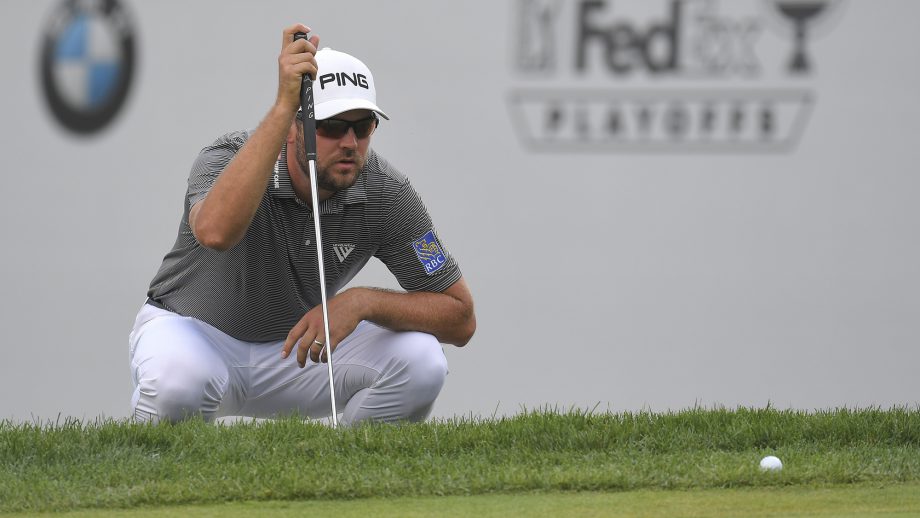 MEDINAH, Ill. – Hideki Matsuyama has never missed the Tour Championship since his first full year on the PGA Tour. He played Friday like he doesn’t want the streak to end.

Outside the top 30 in the FedEx Cup for the first time at the BMW Championship, Matsuyama made five birdie putts from 15 feet or longer and broke the course record at Medinah with a 9-under 63 for a one-shot lead going into the weekend.

The explanation for what went right wasn’t that long.

“I did make a lot of long putts today, and that was the difference,” Matsuyama said through his interpreter.

That was a big difference for Tiger Woods, too. He made only two putts longer than 6 feet, made a pair of bogeys from the bunkers late in the round and had to settle for another 71. Woods, who needs a top 10 to advance to the Tour Championship, was tied for 49th.

“I left quite a few shots out there,” Woods said.

Matsuyama was at 12-under 132, one shot ahead of Patrick Cantlay (67) and Tony Finau (66). Justin Thomas made six birdies to offset three bogeys in his round of 69, leaving him two shots behind.

The Canadian duo of Adam Hadwin (Abbotsford, B.C.) and Corey Conners (Listowel, Ont.) both put up stellar rounds of 68 and 66, respectively, to share fifth place heading into the weekend.

.@coreconn chips in to move inside the top 30 in the #FedExCup playoffs 👊🏼🇨🇦 pic.twitter.com/WcaJ4pdOxM

Cantlay, Finau and Thomas are all assured of being among the top 30 who advance to the Tour Championship next week, where everyone in the field will have a shot at winning the FedEx Cup and the $15 million prize.

Matsuyama won four times on the Japan Golf Tour as a rookie after he graduated college, and then won the Memorial in 2014 and narrowly got into the FedEx Cup finale at East Lake. He was as high as No. 2 in the world just two years ago after the U.S. Open.

But he has gone two years without winning, and Friday was the first time he has led after any round since his most recent victory at Firestone in the Bridgestone Invitational.

“It’s been a long time since I’ve been in contention,” Matsuyama said. “Hopefully, I can play well. I’ve been struggling for a while this year. Hopefully, that can turn around and I’ll have a good weekend.”

Cantlay has gone 36 holes at Medinah with only one bogey, and key to his round was avoid one late. His tee shot on the 320-yard 15th caught enough of the wind that bounded right into the water. He took his penalty dropped, chipped to 8 feet and saved par, got up-and-down on the next hole and then finished with two more good putts, one for birdie and another for par.

“Any time you make a par after hitting the ball in the water it’s good,” he said. “It gave me some nice momentum to close out the round.”

Woods won the Tour Championship last year, capping a remarkable return from four back surgeries with his first victory in five years. It was an extraordinary afternoon considering where he had been, a moment topped in Georgia some six months later when he won the Masters.

But after he pulled out at Liberty National last week citing a mild oblique strain, he slipped 10 spots to No. 38. And while it was a mild surprise when he showed up at Medinah, he’s going the wrong direction in the FedEx Cup.

He isn’t ruling out a return to the Tour Championship to defend his title, but he’s running out of time and not making enough birdies.

Woods hit it to tap-in range on the 11th, and then ran off birdies on the 14th and 15th hole to slowly get back into the picture at Medinah. And then he made consecutive bogeys from the bunker, had to settle for another 71 and was right back where he started.

“I’m going to have to have a great weekend and make a lot of birdies and post some rounds in the mid-60s to give myself a chance at it,” Woods said. “Putt well and I’ll shoot good scores. I haven’t done that.”

Jordan Spieth also is on the verge of ending a second straight season without a victory, and without a trip to East Lake. He made progress at Liberty National with a tie for sixth, and he needs another finish like that to crack the top 30.

He did not need to chop his way to a double bogey on the par-3 eighth that left him at the bottom of the back. Spieth rallied with five birdies on the back nine, and he believes he has the “firepower” to post two low scores and hope it’s enough.

There was a realistic side to him Friday, especially after the double bogey, that his season was over because of how he felt over the ball. Yes, he still has an outside chance. But he sure didn’t sound consumed by it.

“I’m far enough out that I’m going to sleep at night not expecting to be there,” Spieth said about East Lake. “It’s not where I want to live, but it’s where I am.”