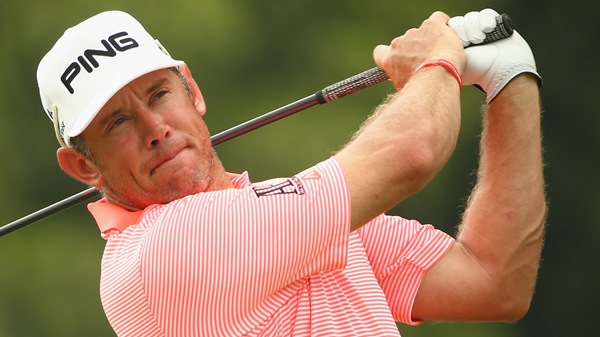 KUALA LUMPUR, Malaysia – Defending champion Lee Westwood was joined by a fast-finishing Alejandro Canizares of Spain to top the Malaysian Open leaderboard by three shots after the second round on Friday.

Westwood followed his opening 6-under-par 66 with a 67, at one stage holding a three-shot lead at Kuala Lumpur Golf and Country Club.

But Canizares caught him with birdies on three of the last four holes in a bogey-free 65, the best score of the tournament. He has shot in the 60s in eight of his last 10 rounds.

At 11-under 133 overall, they lead by three from Bernd Wiesberger, the Austrian who has been threatening a third European Tour win in the past month. On the desert swing, he tied for sixth in Abu Dhabi, was third in Doha, and tied for fourth in Dubai.

Wiesberger was a shot ahead of Paul Waring of England (68), and Peter Lawrie of Ireland (66).

“I was leading this time last year, and I’m leading again,” Westwood said after rolling in a 15-foot birdie putt on the 18th green.

“I feel like I’m capable of a lot of low scores, my swing is getting towards where I want it, and I’m feeling comfortable on the greens.”

McDowell mixed four birdies with three bogeys and a double bogey, to fall six shots back.

It has been a promising display so far from Lawrie, who won the Open de Espana in 2008 before a gradual decline that ended with him losing his tour card last year.

“I’m very lucky to have received a sponsor’s invite,” Lawrie said. “I’ve been in the doldrums for the past 20-odd months. I’ve struggled with a lot of swing changes and confidence, but my confidence is coming back. Yesterday and today I played flawless golf.”

Canada’s Richard T. Lee has a share of 6th at 5-under, five-shots off the lead.

Former PGA Championship winner Y.E. Yang, former world No. 9 David Howell, and prominent Indians Jeev Milkha Singh and Arjun Atwal were among those to miss the cut, which was at 2 over.