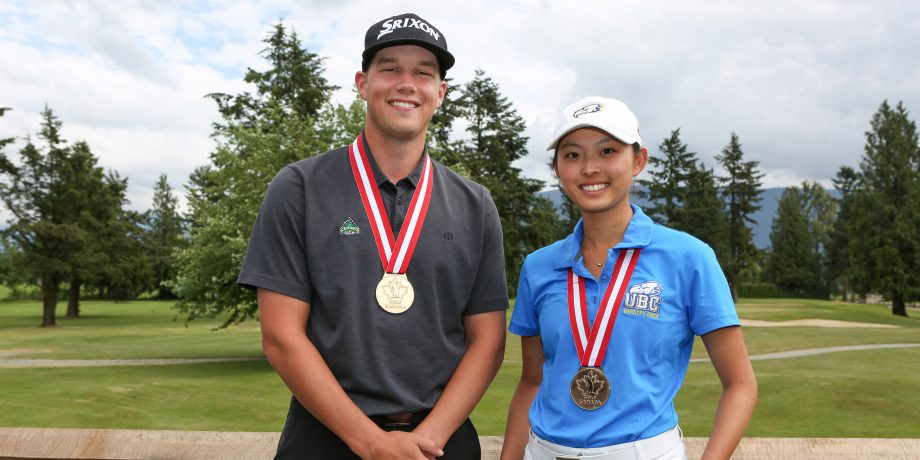 CHILLIWACK, B.C. — History was made at the Canadian University/College Championship as Avril Li went wire-to-wire to lead the University of British Columbia Thunderbirds to their third-consecutive win in the women’s team division, while Daniel Campbell helped the University of the Fraser Valley Cascades become the first host institution to win a team title since the 2014 University of Manitoba Bisons.

Once again, the University of the Fraser Valley Cascades showed that they were the team to beat, leading all four rounds of the men’s team tournament to earn a well-fought victory. Going into the final day with a spectacular 18-shot lead, the Cascades successfully held on to win the men’s team title with an overall 26-under-par 1126.

“For the guys, it was just a dream week. We got off to a hot start and got a little bit better each day,” said UFV coach Chris Bertram, the pride in his team evident in his voice. “It’s amazing. To have all our friends and family here to cheer us on makes it special.”

The University of Victoria Vikes maintained their second-place spot and finished the tournament with a 9-under-par 1143, 17 strokes behind the Cascades. The University of Manitoba Bisons scored the lowest round of the day but ended up third, with an even-par 1152 total.

Leading the way for the UFV Cascades was Daniel Campbell, who held onto his third-round lead to come out on top in the men’s individual draw. Campbell, who joined the Cascades in 2017, closed out the tournament with a final 11-under-par 277.

For Campbell, helping the Cascades win the men’s team division meant the most.

“The best part has to be winning the team event,” he said with a huge smile. “Winning the individual is extra but we’re here to win team championships.”

Vancouver Island University Mariners player Wyatt Brook fired the lowest-round of the day, a 4-under to end the tournament sharing a piece of second with Baptiste Mory of the Université Laval Rouge et Or at a tournament total of 7-under-par 281.

“It was really fun. We had three freshman play pretty well and then Avril Li has played a great tournament, said UBC coach Chris MacDonald. “We’ve been away now for three straight weeks so our players are excited but ready to go home and get some rest.”

The University of Victoria Vikes ended the tournament 34 strokes back of the lead at 53-over-par 917. The Cascades jumped two spots to third, rounding out the top-three women’s teams with 58-over-par 922

In the women’s individual competition,Thunderbirds junior Avril Li earned medallist honours at 4-under to help secure victory for the Thunderbirds. The Port Moody, B.C., talent started the tournament off tied for first place with fellow teammate Kelly Hellman before claiming solo-first in the other three rounds.

“I’m so proud of my team”, said Li excitedly when asked about her day. “I was a bit shaky personally in the start but after five holes it got better.”

Sarah Dunning of the University of Guelph Gryphons got off to a rough start with back-to-back bogeys on the second and third hole but managed to hold on to second place with an overall 3-over-par 291. University of Toronto Varsity Blues’ Ana Peric finished third with a 7 over.

The women’s and men’s individual winners receive an exemption into their respective Canadian Amateur Championship. The top three men’s and women’s individual finishers qualify for the 2019 Summer Universiade.

Click here for information on the tournament; credit to Chuck Russell/Golf Canada.