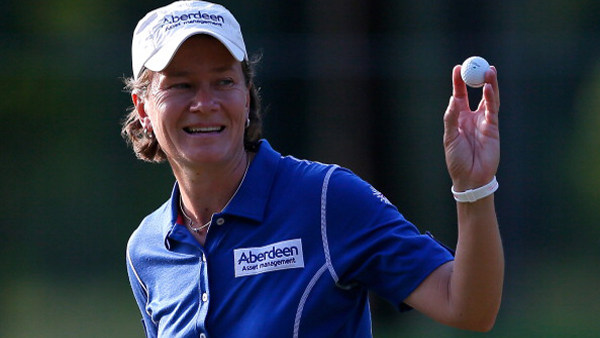 Catriona Matthew remained atop the Airbus LPGA Classic leaderboard Friday, birdieing four of the last seven holes to take a one-stroke advantage over Charley Hull into the weekend.

Matthew had six birdies and a bogey – on the par-4 ninth – in her afternoon round.

“I played actually probably pretty well today,” said Matthew, who opened with a 64 on Thursday. “I hit 17 greens, so I gave myself a lot of chances. I didn’t hole many on the front nine, but then the putter got going a little bit on the back nine.”

The Scot won the last of her four LPGA Tour titles in 2011.

“Obviously, there’s still 36 holes to go,” Matthew said. “If it’s anything like the first two days, we’re going to have to keep making birdies.”

Hull also dropped a stroke on No. 9, her final hole of the day. The English player birdied Nos. 6-8 and had five birdies in a seven-hole stretch before closing with her lone bogey of the week.

“Hitting it pretty straight,” Hull said. “Hit my irons good and holing some good putts. Missing a few putts, but you’re always going to miss a few putts when you’re playing well. But I’m just excited about this golf course. I quite like it.”

Hull won a Ladies European Tour event in Morocco in March a week before her 18th birthday. She closed with a 9-under 62 and won on the first hole of a playoff.

The teen is comfortable in the warm conditions in Mobile.

“The weather’s been pretty hot, but I quite like it,” Hull said. “I think it’s a great place and it’s very green and a bit different than I expected. The trees are a lot different, but I enjoy it a lot.”

Anna Nordqvist, Jessica Korda and Hee Young Park were 10 under. Nordqvist, the winner in Thailand and Carlsbad, had a 66. Korda, the Bahamas champion, shot 67, and Park had a 66.

“I got the ball close and was able to kind of make a couple putts on my front nine, which was the back nine,” Korda said “Hopefully, I can keep that momentum going.”

Park, playing alongside Matthew, eagled the par-5 16th for the second straight day.

Kraft Nabisco winner Lexi Thompson and Jenny Shin were 9 under. Thompson had a 65, and Shin shot 68.

Michelle Wie, the winner in Hawaii, was 7 under. She followed her opening 71 with a 66.

Top-ranked Inbee Park missed the cut with rounds of 74 and 76, ending her cuts streak at 22. She had 34 putts in the second round and played her final nine in 4-over 40.

The South Korean star is winless in nine tour starts this season after sweeping the first three majors last year and finishing the season with six victories. She last missed a cut last May in the Bahamas.

Jennifer Kirby, who was announced as a member of Team Canada’s developmental Young Pro Squad this month, carded 68 to end tied for 16th.