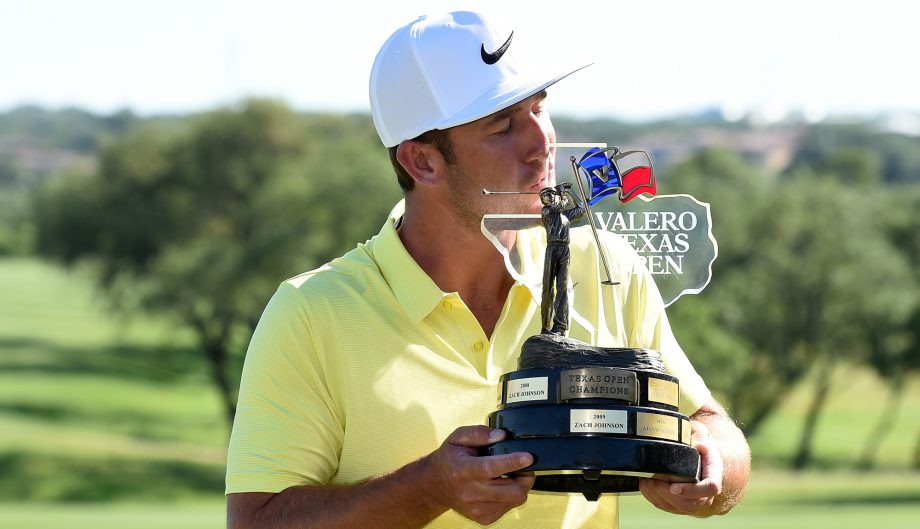 SAN ANTONIO – Kevin Chappell made an 8-foot putt on the final hole to win the Valero Texas Open by one stroke on Sunday.

Chappell had a 4-under 68 in the final round to finish at 12 under for the tournament, edging Brooks Koepka at TPC San Antonio to earn his first PGA Tour victory in his 180th career start.

“A big relief,” the 30-year-old Chappell said. “There’s been quite the monkey on my back for some time now about getting that first win. And to take that off and not have to answer those questions anymore is nice.”

Koepka, a member of the U.S. Ryder Cup team last year, was looking for his second PGA Tour win. He had the best round of the day at 7-under 65. Before Chappell came down the 18th hole, Koepka had birdied the hole with a 3-foot putt to tie him.

“It’s hard to win out here – everybody knows that,” Koepka said. “I’m knocking on the door to get my second win. It’s nice for Kevin to get his first win. That’s pretty cool.”

Second-round co-leader Tony Finau got in a position to tie Koepka when he birdied four of five holes on the back nine. But his par-bogey finish left him to settle for a final-round 69 and a third-place tie with Kevin Tway (69) at 9-under.

Australian Aaron Baddeley fired 68 to finish fourth at 8 under.

Nick Taylor (74) of Abbotsford, B.C. was the top Canadian. He finished 2 under in a tie for 22nd place. Ottawa’s Brad Fritsch tied for 69th and Adam Hadwin, also of Abbotsford, tied for 72nd.

Koepka, trailing Chappell by a shot coming up the 18th, took a 3-metal out of his bag and considered taking a crack at reaching the 606-yard par-5 in two. But he had 293 yards left with a slight uphill shot into the wind with a creek fronting the green.

“I really wanted to go for it – I really wanted to,” Koepka said. “But my caddy was kind of pulling the reins back and he wanted me to lay up, and it was probably a good thing that we did.”

He put the club back in his bag and laid up to create a 90-wedge approach. He stuck that to about three feet and made the birdie to go into the clubhouse tied with Chappell.

Chappell had almost the same distance for his approach on 18, and he landed it past the hole to set up the winning putt.

“I wouldn’t want it any other way,” said Chappell, a Californian who had been runner-up six times in his career. “Brooks kept me honest out there today. He made me had to do it the right way. There wasn’t any question I was going to make 4 (birdie) and win the golf tournament.”

Finau closed with birdies on four of five holes coming to the 17th. He was just a shot behind Chappell’s lead, but he parred there and drove next to a cactus bush on the 18th. He punched out to the fairway, removed cactus needles from his leg, then put his approach into the creek. He took a penalty drop, and his bogey ended his chances.

Chappell clung to a one-shot lead after Koepka birdied No. 11 with a 23-foot putt and another one at the next hole putting inside seven feet.

Koepka let a scoring opportunity get away at the 14th, a reachable par-5 at 567 yards. He tagged a 328-yard drive, but he found the rough and failed to get to the green with his second shot, and then missed a 4-foot birdie putt.

“It was an awkward little putt,” Koepka said. “I probably didn’t read enough break. It was probably the worst putt I hit all week and the worst I’ve hit in a long time.”

About 45 minutes later, Chappell came to the hole and sent his second shot 221 yards, about pin high on the green. Even though he lipped out the 11-foot eagle, his tap-in birdie gave him two strokes over Koepka.

Chappell gave Koepka new life when he bogeyed from a greenside bunker at the 15th, and it took until the 18th for Koepka to finally equalize.

Gay, who made it into the field thanks to a 27-event medical exemption due to thumb surgery, earned enough money to make good on the exemption and regain full status on the Tour.

Chappell had a one-shot advantage over first-round leader Branden Grace and John Huh entering the day, the first time he has led after 54 holes on the PGA Tour. Koepka, who won two years back at Phoenix, was four back and had 10 players between him and the lead.

But Koepka made the charge with birdies on his opening two holes, then a streak of three more starting with a 20-foot birdie putt at No. 6. He followed with birdie of almost 40 feet on the seventh green and knocked in one from 10 feet at the eighth to tie Chappell.

But while Chappell stuck his tee shot on the 189-yard seventh inside five feet and made birdie to get to 10-under, Koepka would make bogey even after hitting the green at the tough par-4 ninth. He left his putt from 42 feet well short and missed the 9-foot par putt he had remaining.

It gave Chappell a two-shot lead with nine holes to play.