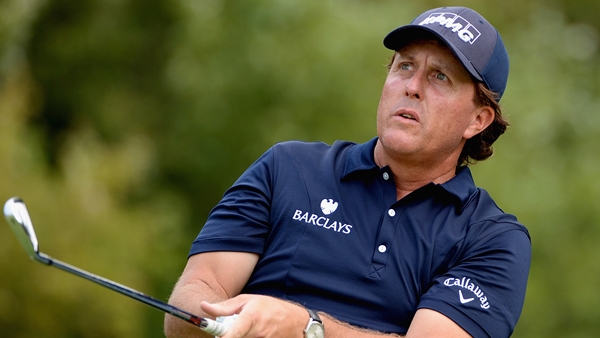 CHERRY HILLS VILLAGE, Colo. – Phil Mickelson and Geoff Ogilvy were eager to get to Cherry Hills for the BMW Championship, for reasons more than just advancing to the third FedEx Cup playoff event.

Mickelson is part of the history at the fabled club in the Denver suburbs.

Ogilvy had only read about it. He took a day off from golf and spent more time with his nose in a book than with a club in his hand.

“I did a little more research on Cherry Hills. It’s supposed to be pretty good,” he said Tuesday night. “Hogan hit 34 greens in a row on Saturday playing with Nicklaus, and then he spins it off 17 with what was nearly a perfect shot. I just want to see how impressive that was, to be honest with you.”

He was talking about the 1960 U.S. Open, the great convergence of three generations – Ben Hogan and his last good shot at a fifth U.S. Open title, Arnold Palmer’s most celebrated charge that began with a driver onto the first green, and the debut of Jack Nicklaus, a 20-year-old amateur who easily could have won that day.

“Not many courses have the history of Arnold Palmer driving a par 4,” Ogilvy said. “I just want to see it.”

Mickelson has experienced it.

Of the 69 players who advanced to the BMW Championship, no one knows Cherry Hills better than Mickelson. He played six matches in 1990 on his way to winning the U.S. Amateur when he was a college kid with his collar turned up and even more bravado than he has now.

On the first hole in one of his matches, it was taking so long because of rulings that Mickelson conceded his opponent a 35-foot par putt, and then rolled in a short birdie. He could only recall four of the six players he beat that week, though he remembers trying to drive the first green every day because that’s what Arnie did.

“I’m pretty excited to get back to Cherry Hills,” Mickelson said. “There’s an emotional tie there for me.”

And for all of them, there is work to be done.

The BMW Championship, which starts Thursday after a Labor Day finish outside Boston, is the final chance for 30 players to advance to the Tour Championship with all its perks, from a mathematical shot at the $10 million FedEx Cup bonus to a spot in the Masters, U.S. Open and British Open next year.

Chris Kirk went to No. 1 in the FedEx Cup with his victory in the Deutsche Bank Championship, which assured him a clear shot at the $10 million even if it wasn’t good enough for U.S. captain Tom Watson to select him for the Ryder Cup.

The more compelling stories are those on the bubble, and no one feels more at home there than Ogilvy.

He missed the cut in The Barclays and was certain he would not be among the top 100 who reached the second playoff event. But he made it to Boston – by two points – when Troy Merritt missed a 10-foot par putt on the final hole at Ridgewood, and hours later, Brendon Todd made a 15-foot par putt on the same hole.

“I thought I was going to be a week-and-a-half into my drinking season at this point,” Ogilvy said.

He thought the same thing at the TPC Boston until he started making just about every putt he looked at over the last 27 holes. Ogilvy briefly was tied for the lead, and his 65-65 finish gave him a tie for second. But even that contained some drama.

Ogilvy was alone in third until Russell Henley made a 30-foot birdie putt on the 18th hole to tie him. Then, Billy Horschel missed a par putt after hitting into the hazard, and Ogilvy wound up in a three-way tie for second.

Because of the points distribution, Ogilvy went from No. 30 after Henley made his putt to No. 24 after Horschel missed his putt.

“I found myself quite interested in Billy and Russell,” he said. “Normally, I wouldn’t. At a normal tournament, you would finish and say, `OK, this was a good week and move on.’ But the FedEx Cup makes you think about that stuff. In a 20-second period, I go from third on my own to tied for third and then tied for second.”

And with that good fortune comes more pressure.

Given the breaks he required to get to Boston, much less Denver, Ogilvy felt he was playing with house money. Now, he is close enough to East Lake – and a return to the Masters for the first time in three years – that it has his full attention.

“Not only is it a realistic proposition, I kind of have to mess up not to get there,” he said. “Before I said it was house money. Anything I did last week was a bonus. Now I’m back in the mix for the whole thing.”

Another guy on the bubble is Canada’s Graham DeLaet. The Weyburn, Sask. is the lone Canuck left in the PGA Tour’s playoffs. He’s currently 43rd on the FedEx Cup standings and will need a good finish to climb into the top 30 and advance to the TOUR Championship by Coca-Cola.