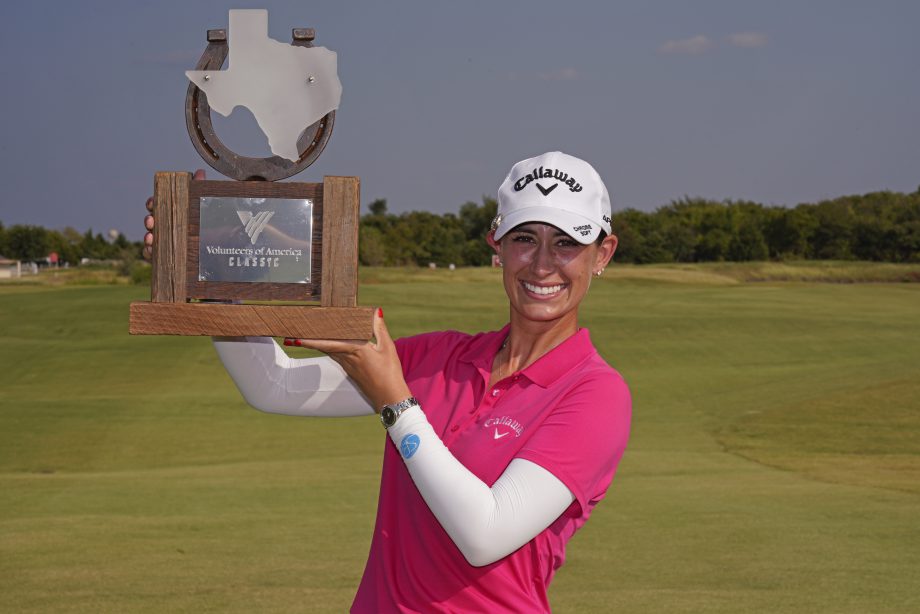 THE COLONY, Texas – Cheyenne Knight struggled so much her rookie season that she made the cut in only half of her tournaments and figured she was headed back to the LPGA Tour qualifying series. One week changed everything.

In the only LPGA event in her home state of Texas, in what she thought would be her last tournament of the year, Knight played bogey-free Sunday and closed with a 5-under 66 for a two-shot victory in the Volunteers of America Classic.

Her first victory on the LPGA Tour comes with a two-year exemption and makes her eligible for the Asia swing. At No. 49 in the Race to CME Globe standings, she is virtually assured of getting to the Tour Championship next month.

“It’s so incredible. I can’t put it into words,” Knight said.

The 22-year-old was in tears even before players rushed onto the 18th green at Old American Golf Club and sprayed her with champagne and water. Knight had pointed to his tournament, which she played as an amateur, all season. She grew up about an hour away in Aledo. And she never plays without thinking of her brother, Brandon, who died in a car accident when Knight was 12.

She dropped her putter and pointed to the sky when her 2-foot par putt dropped to finish at 18-under 266, two shots ahead of Brittany Altomare (67) and Jaye Marie Green (69), both trying for their first LPGA title.

“I think I had a second caddie. I know he’s watching in heaven, and he’s so proud of me,” Knight said. “This is for Brandon.”

Altomare, who played in her first Solheim Cup last month, got up-and-down from just short of the 17th green for birdie to briefly tie for the lead. Knight, playing in the group behind, holed a 15-foot birdie putt to regain the lead.

Needing birdie to have any chance, Altomare gunned her putt about 6 feet and missed the next one, taking bogey to clear the way for Knight.

“I keep saying this, but I think the more I put myself in those situations, eventually, statistically, I feel like it has to happen,” Altomare said.

Green began the final round with the lead and still was one shot ahead through 10 holes until she bogeyed the 11th and 12th and never caught up. With a runner-up finish, Green moved to No. 48 in the Race to CME Globe and will be eligible for Asia event, which do not have cuts.

Knight had not finished better than a tie for 29th in the 54-hole event in Arkansas going into the Texas event, the final full field of the year.

“I said when I got my card this was the event I was most looking forward to,” said Knight, who tied for 29th three years ago when she played as an amateur. “Who would have thought this would help me secure my card. I thought I was going back to Q-school. To win this means everything, knowing I can persevere.”

Stephanie Meadow of Northern Ireland, who was No. 112 on the money list, made an 18-foot birdie putt on the final hole to keep her card by moving into the top 100 and avoid returning to the LPGA Q-Series at the end of the year.

Meadow closed with a 67 and tied for sixth with Katherine Perry, who also needed a birdie on the final hole to keep her card. Perry missed from 15 feet and will finish outside the top 100 on the money list.