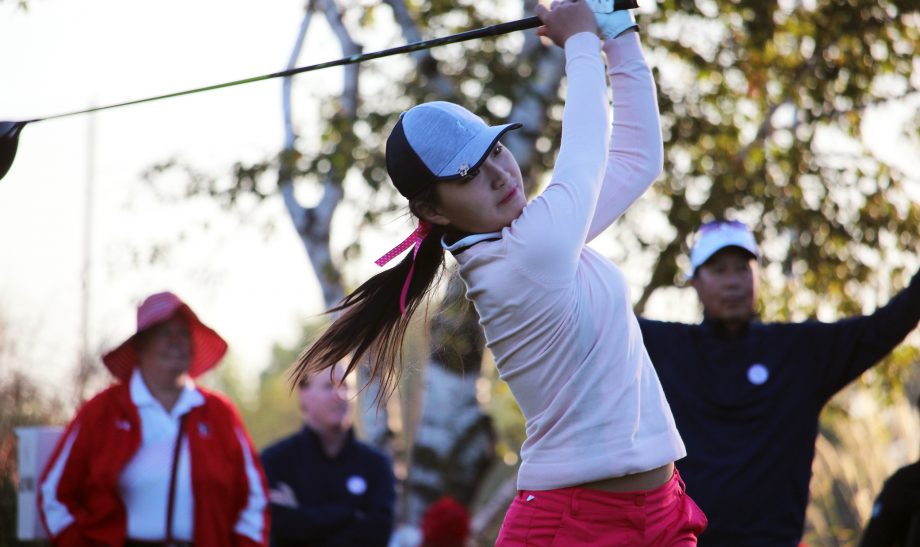 MISSISSAUGA, Ont. – Cloud cover and blustery winds set the backdrop for the second round of the World Junior Girls Championship at Mississaugua Golf & Country Club. China’s Du Mohan carded a 2-under 70 to climb into a share of the lead alongside first-round leader Yuka Saso of the Philippines.

Du from Fujian, China, collected five birdies on the day, including a back-to-back pair on Nos. 15 and 16, to move to 1-under in the competition. Saso of Santa Rosa, Philippines, opened the day at 6-under, but the 15-year-old relinquished her lone hold of the lead following a 5-over showing.

“I putted very well today,” said the 14-year-old Du. “I had a lot of long downhill putts, but my distance control was very good. I was able to get the feeling [of the greens] very well and got five birdies.”

“I am very proud to be representing China,” she added. “I hope I can do my best and finish the week under-par.”

The trio representing the Philippines – Saso, Constantino and Sofia Angela Legaspi of Quezon City – maintained its lead in the team competition at 3-under 285. Teams USA, Korea, Sweden and China are tied for second at 4-over 292.

The unique opportunity to play for her homeland is not lost upon Constantino.

“I’m really proud to play here and represent my country,” said the 15-year-old. “Of course, not all kids can play in this tournament, so being a part of it is really good for me.

“We are one of the [smaller] countries, we don’t have many players, so I’m really proud to say that I’m from the Philippines. We didn’t have much confidence coming here because there were bigger countries, so it’s really nice to be here and play this [well].”

Matching 73s from Céleste Dao of Notre-Dame-de-L’Île-Perrot, Que., and Surrey, B.C., native Hannah Lee have given the pair of Canada Two members a share of 18th to lead the Canadian contingent.

The third round of tournament play will begin at 8 a.m. Additional information from the competition can be found here.