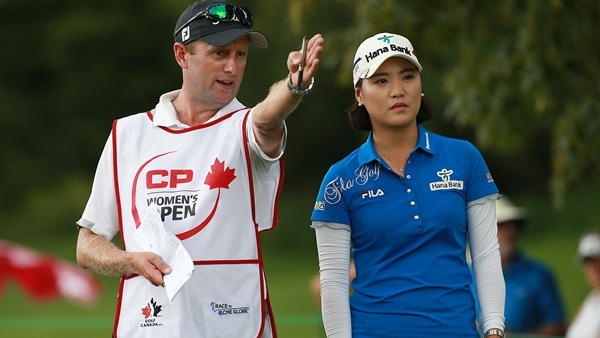 LONDON, Ont. – On the eve of the Canadian Pacific Women’s Open, So Yeon Ryu, Na Yeon Choi and Inbee Park got together for dinner with some fellow South Korean golfers. While Park picked up the tab after winning the LPGA Championship, all three benefited from the fellowship.

Ryu set a new course record with a 9-under 63, Choi was one shot behind her and Park three off the lead after the first round of the US$2.25-million tournament at the London Hunt and Country Club. Traditional Korean food was on the menu, but Ryu credited the company, rather than the cuisine, for her strong start.

“We had a talk together to help us relax,” Ryu said. “Sometimes when you’re hanging out with really good friends, it can make you more relaxed and enjoy the golf. Today, I really enjoyed my golf. That comes from great friendship.”

Ryu’s 63 was one shy of the tournament record, and her 9-under-par tied the best mark, set in 2009 by Song-Hee Kim. The 63 was also a competitive course record at London Hunt and Country Club. The 24-year-old hit nine birdies and played a bogey-free round.

Choi chipped in three times during her morning round, and her 8 under looked like it would stand up until Ryu got hot on the back nine. Choi knew she chipped in twice from inside of 10 yards and once from a bunker 25 yards away but had to check her scorecard to figure out how many birdies she hit.

“I felt good about my game, but I didn’t really realize I had five birdies in a row,” Choi said. “I didn’t really think about I want to birdie every hole.”

Choi credits Canadian manager Greg Morrison for her love of and strong play in Canada. Her career-best round of 62 came in last year’s Manulife Financial LPGA at the Grey Silo Golf Course in Waterloo, Ont.

When Ryu saw Choi’s score before she teed off, she thought 3 under would be a realistic goal for her.

Swede Anna Nordqvist, who was playing with and pushed along by Ryu, was alone in third at 7 under.

“She made nine birdies today and I made seven,” Nordqvist said. “It gives you a lot of momentum or a lot of positive energy just seeing a lot of birdies.”

Park, who lamented missing a few five- or six-foot putts, was part of a group at 6 under along with Azahara Munoz, Danielle Kang and Xi Yu Lin. Other than that, she called it a “perfect round.”

“Ball-striking was almost perfect,” Park said. “Everything as pretty much right on line. These greens, they didn’t have much breaks in them, but I misread them, a couple of them. Hopefully I’ll play a little bit better tomorrow and hole some more putts.”

Park predicted that, given the softened conditions of the course due to overnight rain, she would have to be more than 20-under par to win this tournament. Choi didn’t think that was realistic until she wrapped up.

“Actually I was thinking like under 15,” Choi said. “But after my score today, which means – if I shoot like 8 under, I think everyone could shoot like 8-under, so we will see.”

Jennifer Kirby (Paris, Ont.) finished at 5 under as the low Canadian. Her playing partners, Brooke Henderson (Smiths Falls, Ont.) and Rebecca Lee-Bentham (Toronto) were each 2 under, along with amateur Elizabeth Tong (Thornhill, Ont.) and Sara-Maude Juneau (Fossambault, Que.).

“I think this course is very scoreable, so I think that it was a good round today, but I still left a few out there,” Kirby said.

Choi left at least one shot on the course, too, as her birdie putt on No. 9 – her final hole of the day – lipped out. A tie for the lead might’ve done wonders for a player who hasn’t won a tournament since the 2012 U.S. Open.

Similarly, Ryu hasn’t won in two years, so the two friends can try to help each other through.

“We kind of talk about how can we get through this one, how do we think about this situation,” Ryu said. “I realize I’m not the only (one going) through the hard time. That kind of conversation makes me more relieved.”

If Ryu and Choi manage to keep up this play through the weekend, one of them might pick up the tab at the next team dinner.

“I’m glad to buy a dinner for them,” Ryu said. “I haven’t won any tournaments the last two years so I’ve been waiting. I wish I can win this week.”