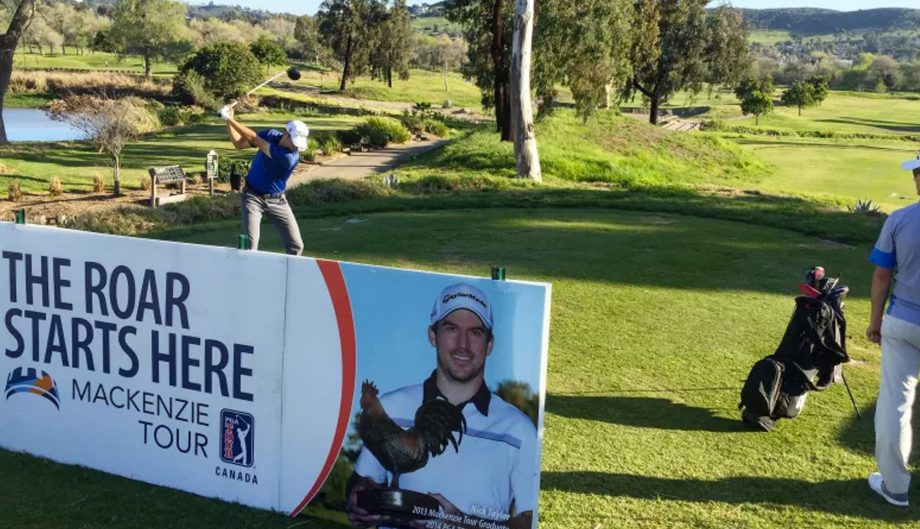 “It’s massive,” said Gilman of earning guaranteed starts up until the season-ending Freedom 55 Financial Championship. “Obviously the goal is to be the Order of Merit winner, and I’m going with guns blazing and we’ll see what happens.”

Picanso and Valder shot closing rounds of 65 and 66, respectively, to share second place, joining California’s Cody Blick and Texas’ Sean Walsh inside the top five, securing guaranteed starts through the first eight events of the season.

Barrie, Ontario’s Eric Hawerchuk was the top Canadian, finishing T15 to secure guaranteed starts through the first four events of the year.

CUTOFF SCORES FOR MACKENZIE TOUR STATUS: After 72 holes this week, every player inside the top 40 and ties earned Mackenzie Tour status for 2017. Below is a breakdown of the cut-offs for status:

BACKGROUND ON THE MEDALLIST: Gilman is hoping to use the Mackenzie Tour as a springboard to return to the Web.com Tour, where he played in 2015. The University of Denver grad made just three cuts that year, but came away from the season with a renewed vision of where he wanted to get to as a pro.

“Hearing so many great things about the Tour, I have plenty of friends who have played it before, and I know there are fantastic golf courses and great people, so there’s a lot of upside,” said Gilman. “Obviously the goal is to be there Order of Merit winner, and I’m going with guns blazing and we’ll see what happens.”

“I stuck to my gameplay. I just tried to hit fairways and greens, because this course is tough and there’s no letup out here,” – Eric Hawerchuk on a stressful week that netted him exempt status for the first four events.

“I knew if I could get it around par, that would have been really good. To get to where I did, it was great. I didn’t exactly expect it, but I just stayed focused and calm, and it just kind of fell into place.” – Brandon McIver on a final round 65 that moved up him 26 spots into 11th place.

CHRIS GILMAN: played on the Web.com Tour in 2015, making three cuts in 12 starts including a T30 finish at the Nova Scotia Open. Owns 23 professional victories, including the 2014 California State Open.

PRESTON VALDER: UCLA graduate played the Mackenzie Tour in 2016 but saw limited action and made just three starts. Has spent part of last two seasons on the Adams Tour.

RICO HOEY: Three-time NCAA All-American in his senior season at USC. Currently ranked No. 15 in the World Amateur Golf Ranking.

ROBBY ORMAND: TCU gradate with three professional wins, including the 2014 Oklahoma Open and wins on the SwingThought Tour and Adams Tour.

NATHANIEL JAMES: Played college golf at Washington and Lee University and had a successful college career and was named a Division III 1st team All-American in 2007 and 2008. Continued into Law School and worked for three years as a Litigation Attorney before turning pro in 2014.

JONATHAN KHAN: Played on the Mackenzie Tour in 2015 and 2016, including a career-best T3 finish at the 2015 ATB Financial Classic. Finished No. 61 on Order of Merit in 2016. Played collegiate golf at the University of Arizona and was featured in Sports Illustrated’s Faces in the Crowd for golf when he was 13 years old.

ANDREW PRESLEY: Played collegiate golf at LSU and TCU with Mackenzie Tour alums Ben Taylor and Paul Barjon before graduating in 2015. Has played mostly on the Adams Tour, where he won once in 2016.

MATHIAS DAHL: Native of Sweden and University of San Diego grad captured one individual collegiate win and was twice named an All-American Scholar Athlete. Made two cuts in 11 starts on the Mackenzie Tour in 2016.