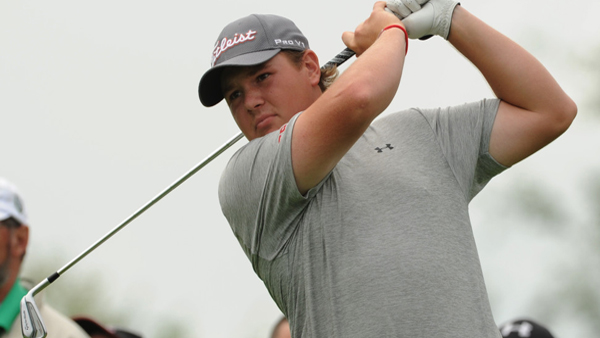 BATH, Ont. – In an impressive show of skill and composure, Kitchener, Ontario’s Chris Hemmerich is making the most of his professional debut at The Great Waterway Classic.

The 21-year, playing on a sponsor’s exemption as a recent graduate of Golf Canada’s National Amateur team, took the solo lead during Saturday’s third round at Loyalist Golf and Country Club before play was suspended due to darkness, reaching 17-under with a birdie on the 15th hole, his last of the day, to lead by two over England’s Kelvin Day.

“I knew that if I came in playing well, I might not be sleeping on a lead, but I could definitely put myself in contention on Sunday,” said Hemmerich, stating a goal that has clearly been accomplished with one day to go. “I just hope that I can finish off those three holes strong tomorrow and be in there battling for it on the last nine holes of the tournament.”

The 21-year old former University of Guelph Gryphon began the day by concluding his second round, which had been delayed on Friday, and reaching 10-under and a tie for third through 36 holes. Through 15 holes in Round 3, Hemmerich is 7-under and without a bogey, putting him squarely in contention for Sunday’s finale.

“I just continued what I’ve been doing each of the first two days. I’ve started to putt a little bit better each day, and I’m just trying to hit fairways and greens,” Hemmerich, the 2014 Ontario Amateur Champion.

The third round will resume at 8:30 AM on Sunday, with fourth round times expected to run from 10:40 AM to 12:30 PM. Groups will once again tee off in threesomes off the 1st and 10th tees.

Despite being up against some stiff competition, Hemmerich said he doesn’t expect to feel too many extra nerves on Sunday, and that he’ll rely on his existing competitive experience.

“I won the Ontario Am this year, and that wasn’t sleeping on the lead, but I was close,” Hemmerich said. “I’m pretty easy-going, so I tend not to put too much pressure on myself. It’s towards the end of the season anyway, so it will be hard to get into the top five. I’m just out here enjoying myself and trying to get a little bit of experience going into next year.”

Day, who began the third round tied for the lead with California’s Micah Burke, had carded two birdies, an eagle and a bogey on the day before play was suspended to sit in solo second spot at 15-under. Argentina’s Tommy Cocha, who fired a 6-under 66 in round three, and Burlington, Ontario’s Michael Gligic were one shot further back at 14-under when play was suspended.