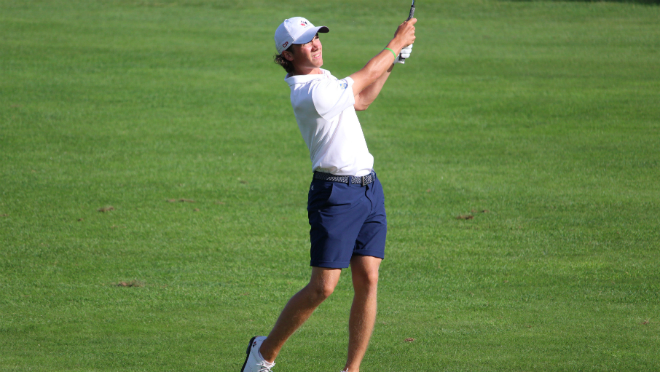 HARTLAND, N.B. – A day after setting the course record, Christopher Vandette of Beaconsfield, Que., fired a 3-under-par 69 in the second round to increase his lead at the 81st Canadian Junior Boys Championship held at Covered Bridge Golf & Country Club.

Vandette now leads the competition by four strokes, extending the three-shot lead he had after his opening-round 62. The highlights of the 18-year-old’s round were two eagles on the 1st and 6th holes, both par-5s. The Team Canada National Junior Squad member also made three bogeys on Tuesday.

“Today, I hit the ball really well again,” said Vandette. “I putted decent, just the big difference was decisions on the course. I made a couple of really dumb mistakes, but I’m still satisfied with how I played out there.”

Carter Graf of Sylvan Lake, Alta., is in second at 9 under. The 2019 Alberta Junior champion roared up the leaderboard with four straight birdies on holes No. 5 through No. 8, on his way to a round of 4 under.

“I got really hot halfway through the round, that kind of kick-started my round” said Graf. “I hit a lot of greens – 17 greens – so it was pretty easy and pretty stress-free. My good friend Chris is in the lead, so it’s going to be a lot of fun to play against each other and battle it out.”

Jeevan Sihota of Victoria sits in third place a 7 under. The 15-year-old carded a round of 3 under, and leads the 16-and-under Juvenile division by one stroke over Thomas Latter (Mississauga, Ont.).

Six players are tied for fourth place at 6 under; Latter, Bennett Ruby (Waterloo, Ont.), Jace Minni (Delta, B.C.), Freddy D’Angelo (Fonthill, Ont.), Dustin Franko (Delta, B.C.) and Luc Warnock (McGregor, Ont.), the latter of whom shot the low round on Tuesday at 5 under.

A total of 77 players who finished 3 over or better have advanced to the final two rounds. The third round is scheduled to start at 8:00 a.m. local time on Wednesday.