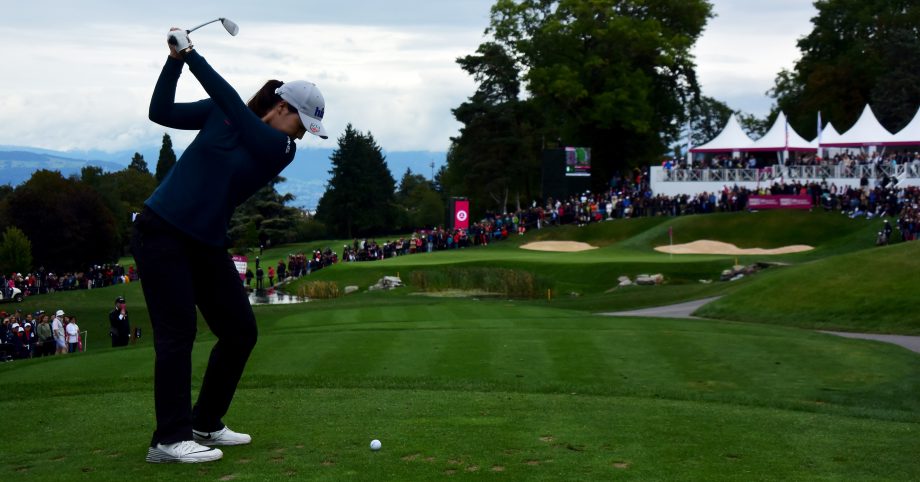 EVIAN-LES-BAINS, France – South Korean golfer In Gee Chun knows she’s in sight of her second major – and a record – after extending her lead to four shots after the third round of the Evian Championship on Saturday.

Chun carded a 6-under 65 in the rain to go to 19-under overall at Evian Resort.

“My game plan for tomorrow is not to think about winning,” Chun said. “Because it puts too much pressure on me.”

Chun, the 2015 U.S. Women’s Open champion, had six birdies and an eagle in a round blemished only by a double bogey on the ninth hole.

After slicing from the fairway into the woods, the ball buried under foliage on an incline. Discussing what to do with her caddie for several minutes, Chun decided against a drop shot and declared it unplayable, going back to where she took the shot from and incurring a two-stroke penalty.

But it takes more than that to ruffle Chun.

“I just want to enjoy everything,” she said.

Her eagle on the 15th was a 35-yard chip from the back of the green that rolled up and across the green with perfect weighting, prompting her to raise her arm triumphantly. Fans wrapped in warm clothing and raincoats cheered.

Chun was smiling again after the next hole, another birdie, moved her to 19 under. The last two holes were mere pars.

Sunday could be a record-breaking day for Chun, who remains on course for the lowest ever 72-hole score in a major.

Henrik Stenson and Jason Day own the major record for men and women at 20 under, while the women’s record of 19 under is shared by four players.

With Chun struggling on nine and then missing a birdie chance on 10, Park birdied those two to move one shot behind her.

It was only brief hope, because Chun was all smiles again when she restored her overnight two-shot advantage with a birdie on 11.

Feng, who started slowly with four pars and a bogey on five, got her game together too late, drifting six shots behind after making 69.

South Korean So Yeon Ryu, who has been remarkably consistent with only one bogey in three rounds – on her 10th hole on Saturday – was seven shots behind Chun in fourth place.

A good day for South Koreans was made even better with I.K. Kim making 64, including eight birdies and a bogey, to rise to fifth.

“I hit probably better yesterday to be honest, but today on the par-5s I was able to reach on the back nine,” Kim said. “So I was able to birdie on those.”

Overall, she was nine strokes behind Chun, while American veteran Angela Stanford was 10 adrift in sixth place.

Defending champion Lydia Ko of New Zealand had a terrible day, making six bogeys in a 4-over 75, and was 19 shots behind Chun in a tie for 36th.

More rain was forecast for Sunday’s final round, and tee times were moved forward by a couple of hours.