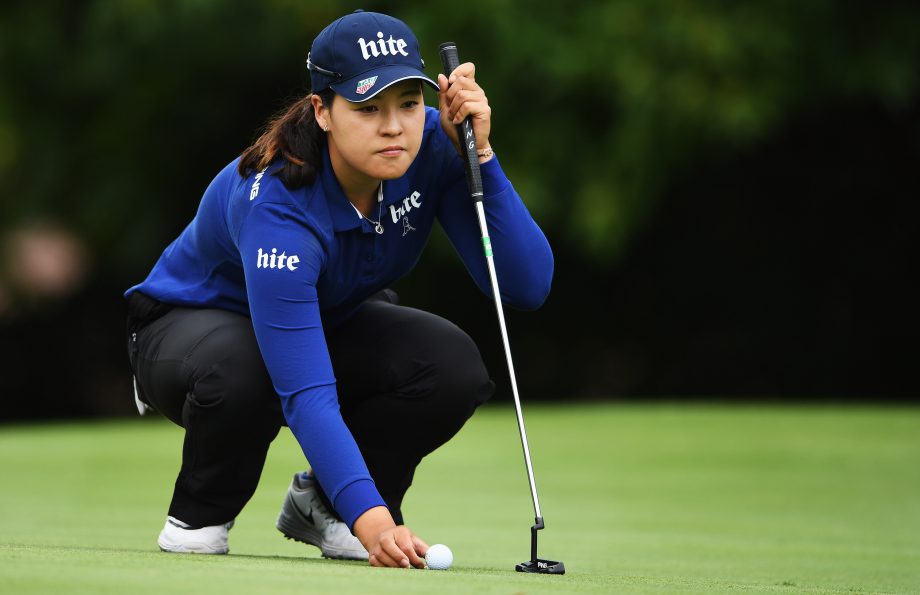 EVIAN-LES-BAINS, France – In Gee Chun posted a 5-under round of 66 to take a two-shot lead at the Evian Championship on Friday, keeping the 22-year-old South Korean on course for the second major of her career.

Chun, the 2015 U.S. Women’s Open champion, had a bogey on the fourth hole but otherwise played with great control, hitting six birdies in rainy and overcast conditions at the picturesque resort overlooking Lake Geneva.

“I always try not to think about winning,” said Chun, who missed the cut here last year. “Thinking about winning is more pressure.”

South Korean Sung Hyun Park, who shared the overnight lead with Chun, juggled three bogeys and six birdies in a round of 68, tying her for second place with Shanshan Feng – China’s only major winner.

So Yeon Ryu, who is also from South Korea, is three shots behind Chun in fourth place after posting 66, matching her score from round 1.

Feng was a shot back overnight, as was American Annie Park, while defending champion Lydia Ko of New Zealand sat seven strokes behind after a disappointing opening day in her bid for a third major by the age of 19.

Feng started to tire on the back nine, hitting two bogeys, but perked up with birdies on the final two holes for a 67.

“There’s no benefit for just long hitters,” she said. “The rough is really long.”

Ko fared better this time with a 68 but is nine shots off the lead.

Playing the back nine first, the South-Korean born New Zealander went out in an even 36. But Ko improved on her way back to the clubhouse with a bogey and four birdies – including a brilliant chip in from the edge of the green on the fifth for one of the shots of the day.

She ended her round with a bogey on 16th and double bogey on the 17th to finish with a 2-over 73 and drop down the leaderboard.

Second-ranked Ariya Jutanugarn of Thailand recovered from her first-round 73 to make a consistent 67 featuring four birdies. But the British Open champion is 11 shots off the lead.

Ko and Jutanugarn are trying to win the Annika Major Award, rewarding the major winner with the best combined record at all five majors of the season. It is named after 10-time major winner Annika Sorenstam.

Veteran American Angela Stanford is four shots behind Chun in fifth place as she tries to win her first major at the age of 38.

“Usually by Friday this course has killed me,” Stanford said. “But I still feel like I have a little energy.”

Her best performance in a major was back in 2003, when she was tied for second at the U.S. Women’s Open.

“Having cameras around all day felt new again,” said Stanford, who has five career wins on the LPGA Tour. “For somebody that hasn’t been in that position for a while.”

Two-time major winner Brittany Lincicome is a shot behind her in a tie for sixth with South Korean Eun-Hee Ji.

Lincicome, who had nine birdies and four bogeys in her erratic 66, had a unique way of describing the course.

“There’s no flat lie anywhere, and then the greens are impossible,” the 30-year-old American said. “Like there’s elephants buried under every one of them.”

Smiths Falls, Ont., native and World No. 3 Brooke Henderson carded an even-par 71 and is tied for 27th. Maude-Aimée LeBlanc of Sherbrooke, Que., holds a share of 57th at 2-over.