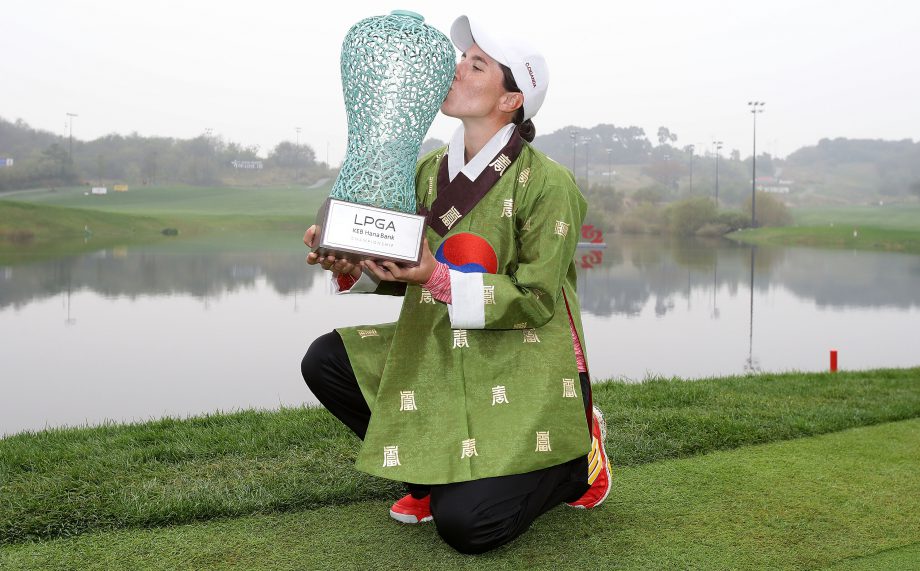 INCHEON, South Korea – Carlota Ciganda beat Alison Lee with a birdie on the first hole of a playoff Sunday in the rainy LPGA KEB HanaBank Championship after each player lost big leads.

The 26-year-old Spaniard won with a 6-foot putt after Lee’s birdie chip from the rough off the back edge of the green missed a half-inch to the right.

Ciganda overcame a five-stroke deficit to Lee on the front nine, then blew a five-stroke lead on the final five holes – getting into the playoff when Lee bogeyed the par-5 18th after hitting her third shot into the water.

Ciganda played the final five holes in 4 over – making a double bogey on 14 and bogeys on 16 and 18 – for a 2-over 70 at Sky 72 in the event that had an emotional start with Se Ri Pak ending her Hall of Fame career Thursday in front of her home fans.

Three-strokes ahead of U.S. Women’s Open champion Brittany Lang entering the day, Lee had a 75 to match Ciganda at 10-under 278 on the Ocean Course. The 21-year-old American, still a student at UCLA, is in her second season on the tour.

Ciganda birdied five of the first eight holes, taking a one-stroke lead with a 6-foot birdie putt on the par-3 eighth. The two-time European Solheim Cup player added a 20-footer on the par-4 10th and was five strokes ahead entering the par-4 14th. She made a double bogey there, dropped another stroke on the par-4 16th and three-putted 18.

Needing a par on 18 for her first victory, Lee hit a wedge that smacked into the front bank and bounced into the water. She was able to drop a few feet off the right edge of the green, chipped past and made a 5-footer to force the playoff.

Lee had four birdies in a five-hole stretch in the middle of the round to seemingly fall out of contention. But while Ciganda faltered in the group ahead, the American made a 5-foot birdie putt on the par-4 15th and a 12-footer on the par-3 17th.

China’s Shanshan Feng (70) and South Korea’s Min-Sun Kim (71) tied for third at 8 under. Feng had her third straight top-four finish in Asia after tying for fourth in China and finishing second last week in Taiwan. The tour will return to China next week for the Blue Bay LPGA on Hainan Island, then make stops in Malaysia and Japan.

Lang had three bogeys in a 75 to tie for third at 7 under.

Hamilton, Ont., product Alena Sharp carded a 74 to earn a share of 39th.

Top-ranked Lydia Ko closed with a 74 to tie for 51st at 3 over. She has four victories this year, one behind Jutanugarn for the tour lead.

Fourth-ranked Brooke Henderson also struggled, shooting 78-72 on the weekend to finish at 5-over. The Canadian teen plans to play all six weeks in Asia.