Clark’s focus on good golf before change from long putter 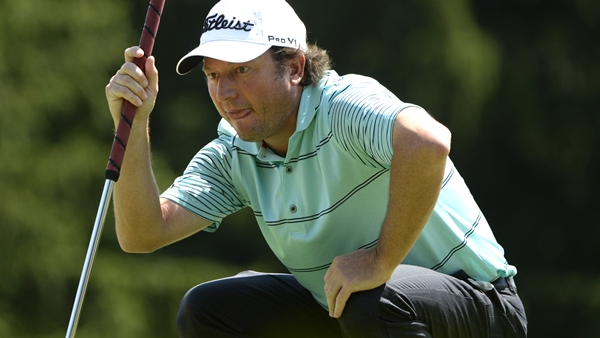 KAPALUA, Hawaii – Tim Clark plans a return to Torrey Pines, this time to compete with his long putter rather than to make a passionate protest of the rule to ban them.

Clark has accepted the new rule outlawing the anchored stroke required for the putter he has used the last 17 years. This is the last year before the rule goes into effect, and Clark isn’t about to waste it by tinkering with a new club or a new stroke. He wants to play good golf.

That said, he already is thinking about the change and he’s not willing to share his solution.

“I’ve got some pretty good ideas, but I’m not going to tell you just in case they try to ban those,” Clark said with a laugh. “But I think I’ve got a pretty good handle on it. I’m not as concerned as I was maybe at the start of last year because I think I’ve figured something out now and I’ll be fine. But I’m not going to spend my time practicing it now while I’m trying to play tournaments this year with what I’ve used.

“Once they tell me it’s done, then it’s done. Then it will be easier to change.”

He said he will stop at the Scotty Cameron putting studio in the San Diego area after the tournament to work on some putters that fit his ideas. Otherwise, he sees 2015 as a time to build on a year in which he won the RBC Canadian Open and lost in a playoff to Bubba Watson at the HSBC Champions in Shanghai.

Clark is starting his year at the Hyundai Tournament of Champions for the first time in four years. It’s a good spot to be, and even though he is among the shortest hitters in golf, the expansive Plantation Course at a par 73 doesn’t bother him.

Zach Johnson, not known for his length off the tee, won last year. Besides, Clark learned long ago to play to his strengths. Even though Watson could hit the ball some 80 yards longer, when they played a par 5 in a playoff at Shanghai, Watson didn’t think he had an advantage because of Clark’s short game.

Part of that short game is putting, and that part is about to go through a significant overhaul.

The USGA and R&A – and by extension, Golf Canada – proposed the new rule on anchored strokes at the end of 2012, and at a players’ meeting at Torrey Pines with the USGA a few months later, Clark showed up even though he wasn’t playing the tournament. He became the face of protest for the dignified manner in which he argued against banning a stroke that had been around for some 40 years, and for the damage it would cause for recreational players.

The PGA Tour took a stand against the rule, though it was adopted, anyway.

Clark said it affected his game at the start of last year until he realized the change was inevitable.

“Eventually, I realized you’ve got to stop worrying about it and just go out and play golf,” he said. “And I did that, and that’s probably why I was able to win in Canada. I didn’t have that worry in there. Like I say, my thought is to come out and be a better putter. Stop worrying about what’s happened and what’s going to happen and come out and be a better putter.”

Another past RBC Canadian Open champion, Carl Pettersson, also uses a long putter that he presses against his sternum. So does Adam Scott, a former No. 1 in the world, and Kevin Stadler. Others, such as Keegan Bradley, used a belly putter. Bradley switched to a conventional putter at the Hero World Challenge last month.

“I think the belly guys are going to find it pretty easy,” Geoff Ogilvy said. “But the guys who have split hands, like Stads, Scotty, Timmy, that’s different. That’s a big change. Putting attached from your belly and moving it away, it’s not that big of a change. You lose your security blanket, but it’s effectively the same stroke.”

Scott gets the most attention because he won the Masters – the first Masters champion with an anchored stroke – and because of his prominence. But he didn’t change until 2011. Clark made the switch when he was in college and hardly anyone was using the club known as a broom-handle putter.

For the last 17 years, he has not placed his hands together on the club. The left hand has been high on his chest, the right hand at his waist.

“In my case, I’ve never gone back and forth. I found something I felt comfortable with,” Clark said. “Obviously, there are weeks I putted terribly. It wasn’t a case of changing putters, it was a case of working on it.”