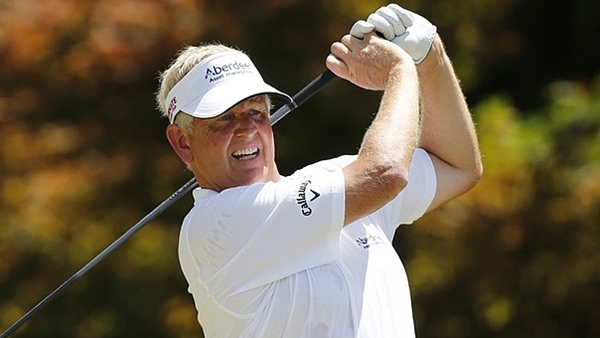 He’s hoping for a repeat.

Montgomerie overcame a double bogey to shoot his second straight 6-under 66, holding onto a one-stroke lead over Janzen after two rounds of the ACE Group Classic at TwinEagles Golf Club on Saturday.

Montgomerie birdied four of his last six holes and is 12-under 132 for the tournament. Lee Janzen also had a double bogey but shot a 7-under 65 and is one back at 11 under.

In 1993, Montgomerie and Janzen squared off in the Ryder Cup in England.

In the 1997 Ryder Cup at Valderrama, Janzen recalls running besides Montgomerie while he was being cheered by the European fans. Janzen took off his hat and waved in appreciation.

“Some guy yelled out, `We’re not cheering for you, Janzen,’ which was quite funny,” he said. “He got a good laugh out of that reminiscing.”

Esteban Toledo and Scott Dunlap are at 8-under 136. Three other players are at 7 under, including Bernhard Langer, who won five tournaments in 2014 as well as 18 top-10 finishes.

Montgomerie birdied Nos. 2, 3, 6 and 7 before faltering for a double bogey on No. 9. He pushed his second shot into a bunker. His chip then ran back down the hill. He chipped to within 4 feet but missed the putt.

“Same things, I mean, you can look at his caliber and his ability and what he did on 9, he probably wants to kick himself, just like I did on No. 7,” Janzen said. “I actually had a chance to make a par.”

Added Montgomerie: “He threw in one early on the seventh and I gave him one back at the ninth and yet we both scored 66, 65. So good scoring and it’s good that’s you’re spurred on by someone, especially your playing partner, someone you respect.”

Montgomerie birdied four of his last six holes. On No. 17, he had a decision to make. He chose to lay up and credited that with getting a birdie.

“It says maybe I’m more patient,” he said. “Maybe I’m maturing, mellowing. I don’t know if that’s a good thing or not.”

Paul Goydos, who won The Allianz Championship last week in Boca Raton, Fla., is at 5-under after a 70.