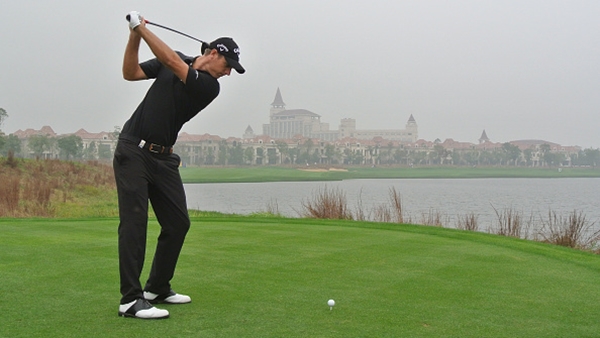 SHANGHAI – Nicolas Colsaerts of Belgium is among the longest hitters in golf. When he’s hitting it straight, it can be a dangerous combination.

Colsaerts overpowered the par 5s at rain-softened Lake Malaren for the second straight day on his way to an 8-under 64, giving him a one-shot lead over Alexander Levy of France going into the weekend of the BMW Masters.

“I kept on hitting good drives, which for me here is a big bonus because it’s pretty soft,” Colsaerts said. “If I keep it out in the short stuff, I’m going to have a lot of shorter clubs in than lots of the other guys, so I can see this course a bit more takeable than the others.”

Levy quickly expanded on his first-round lead with three birdies in the opening four holes. He made two more birdies in the middle of the back nine to try to keep pace with Colsaerts and wound up with a 66.

Levy already has won twice this year, including the Volvo China Open. His most recent victory was in Portugal earlier this month in a tournament cut short to 36 holes because of rain. He beat Colsaerts, who had opened with a European Tour record-tying 60.

Colsaerts isn’t interested in payback. He’s just happy he is starting to play well again after dropping to No. 142 in the world and returning to the Ryder Cup at Gleneagles not as a player but to do television work. He has gone 75 tournaments worldwide without winning, dating to the World Match Play Championship in 2012.

“I felt like I’ve been in the zone a couple of times lately, and it doesn’t really happen in such a short period of time like this,” he said. “So it’s pretty nice when you can get it going like this. I’ve been playing quite well for the last couple of months.”

Romain Wattel of France had a 67 and was three shots behind. Branden Grace of South Africa (66) was among three players at 10-under 140.

Overnight rain soaked Lake Malaren, and the players caught a break when heavy rain in the forecast never materialized. Instead there was an overcast sky, soft fairways and slow greens. It was long enough that Colsaerts had to hit fairway metal into some of the par 5s, though he still had no trouble reaching them.

“I was actually surprised at how well I’ve managed them, because for somebody that hits it as long as me, I don’t really think my stats on the par 5s are as good as they should be,” Colsaerts said. “There’s probably guys that hit it a lot shorter and have a much better scoring average on par 5s. … I’m quite happy with the way the par 5s have been going because I’ve been going pretty low on them.”

Thomas Bjorn hasn’t played at all since the Ryder Cup. His neck had been bothered him even at Gleneagles, though he didn’t let on and made it through the week. He was supposed to play the World Match Play and couldn’t get out of bed for three days.

He wasn’t expecting much at the BMW Masters, though he wasn’t expecting a start like this. Bjorn missed a short putt on the opening hole to make bogey, and then took a triple-bogey 8 on the third hole. Just like that, he was back to even par for the tournament. The rest of the round was a blur. Bjorn closed out the front nine with three straight birdies, and then birdied his last two holes for a 67.

“You have days like that where all of a sudden, it just all starts going your way,” Bjorn said. “And that was my day today. I would like to play the first three again.”

Graeme McDowell got careless with two shots on the back nine that led to bogeys, giving him a 69 and putting him six shots behind along with Shane Lowry (66) and Jamie Donaldson (68). Ernie Els (68), Justin Rose (65) and Ryan Palmer (67) were another shot behind.

The BMW Masters is the first of four “Final Series” events that conclude the European Tour season. Rory McIlroy, with an insurmountable lead in the Race to Dubai, chose to skip the two events in China and the third event in Turkey.