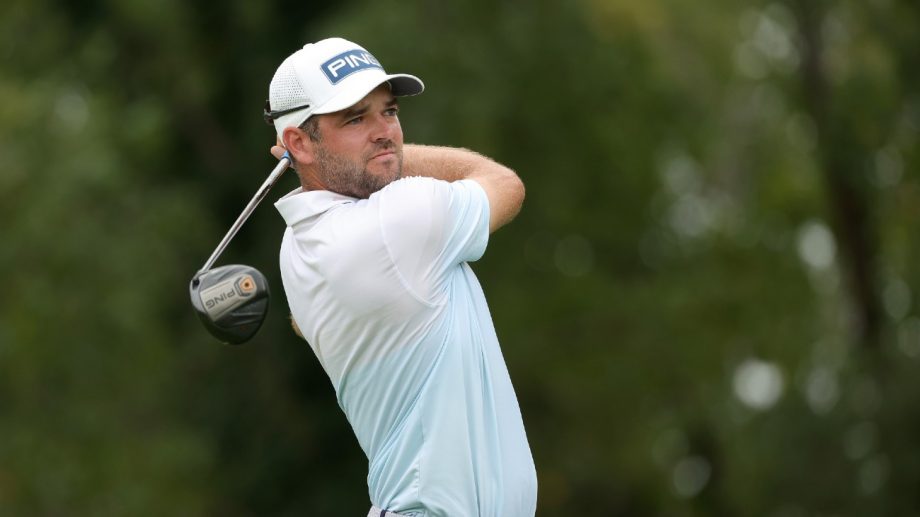 JERSEY CITY, N.J. (AP) Cameron Smith missed out on his chance at a 59 and figured he at least would keep close to the lead Saturday in The Northern Trust. Thanks to a few surprising blunders by Jon Rahm, they wound up in a tie.

And now they get a day off because of Hurricane Henri.

Smith missed a 12-foot birdie putt on the final hole and had to settle for an 11-under 60 to set the course record at Liberty National. Rahm finally got going with a string of birdies, only to twice hit into the water that briefly cost him the lead and certainly slowed his momentum.

The U.S. Open champion had two birdies, one bogey, a double bogey and a terrific par save over the final five holes to scratch out a 67.

Justin Thomas (67) and Tony Finau (68) were three shots behind. Shane Lowry and Corey Conners each shot 62 and remained in the mix. Conners scored his lowest career round on Saturday flying up the scoreboard with an eagle and 9 birdies.

The average score in the third round was 68.3

Rahm was still 30 minutes from starting his third round when the PGA Tour looked at the path of Henri and determined there was enough rain and dangerous wind on the edges of the hurricane that it was best to wait until Monday for the final round.

Workers began taking down loose structures, such as the poles to which cameras are attached for its ShotLink data. The final round Monday won’t start until the course is ready, and it likely will be played in threesomes off both tees.

That’s what made the finish important. There’s enough uncertainty about the storm and any lingering weather that a 54-hole event was not out of the question.

Smith teed off some three hours before the leaders and opened with five birdies in six holes, one of several good starts. The Australian, however, kept it going. He picked up his eighth birdie on the 13th, came within a foot of a hole-in-one on the 14th and started thinking 59.

Smith narrowly missed an eagle putt on the reachable par-4 16th, hit a wedge stiff on the 17th to reach 11 under for the round and was one birdie away from the 13th sub-60 round on the PGA Tour. His approach to the 18th settled 12 feet to the right of the flag.

Even with Smith posting his 60, Rahm regained the lead with his fifth birdie of the round on the 11th hole, and he had good scoring chance ahead of him.

They just didn’t work out very well for him.

From the fairway on the par-5 13th, he found the water in front of the green. After a penalty drop, he hit it well to the left into deep rough on a bank, barely got that on the green and took two putts for a double bogey.

Then, he went long on the par-3 14th along the Hudson River into rough so thick he could barely see his ball. Opening up the face of his lob wedge and playing it like a bunker shot, he chopped out superbly to 5 feet for par.

He regained a share of the lead with a short birdie on the 15th, and then drove just left of the green on the 16th. But his flop shot came out way too hot, rolled across the green and into the water, leading to bogey. He answered that with a 2-foot birdie on the 17th and narrowly missed a birdie chance on the 18th.

Thomas was among several players making a move that got stopped in their tracks. He started the back nine with three birdies in four holes, only to go long of the par-3 14th into a hazard and made double bogey. Even so, he’s very much in the mix.

Harold Varner III made his blunder at the worst time. A poor drive on the 18th was followed by a blocked approach over the wall and into the hazard. He made triple bogey, had to settle for a 68 and went form one shot off the lead to a tie for ninth, four shots behind.

Varner is still in good shape to be among the top 70 in the FedEx Cup who advance to next week. More pressure is on Tom Hoge (No. 108) and Keith Mitchell (No. 101), who have to finish somewhere around the top 10 to keep their seasons going.

Hoge shot 67 and was tied for sixth with Lowry and Viktor Hovland (65), three shots behind. Mitchell took triple bogey with a bad drive on the 10th. He was tied for 11th, five behind.