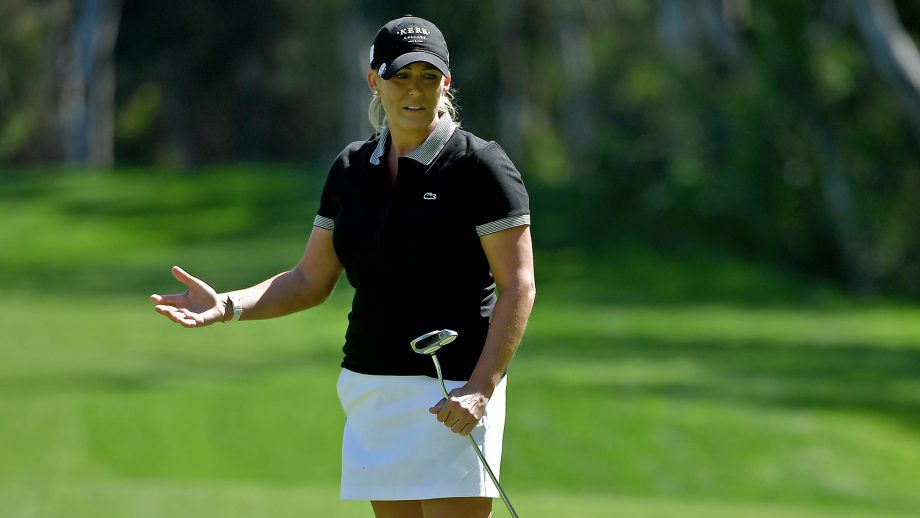 CARLSBAD, Calif. – Cristie Kerr blew a five-stroke lead Saturday in the Kia Classic to set up a final-round showdown at Aviara Golf Club.

A day after shooting an 8-under 64 to open the big lead, Kerr had a 75 to drop a stroke behind playing partner Lizette Salas, Eun-Hee Ji and In-Kyung Kim. Kerr was tied with Caroline Hedwall, Wei-Ling Hsu and Cindy LaCrosse, and four players were another shot back in the final event before the major ANA Inspiration next week at Mission Hills.

“There is still Sunday,” Kerr said. “Somebody else got to sleep with the lead.”

The 40-year-old Kerr had a double bogey on the par-4 15th after snap-hooking a drive into the trees, and hitting a hybrid off a cart path.

“I just didn’t have it,” Kerr said. “I’ve got to go work on my game a little bit. Kind of been a little bit of the story this year, a little bit of inconsistency. Just got to be grateful I’m only one back with a whole new Sunday.”

The 2015 winner at Aviara, she followed the double bogey with a two-putt birdie on the short par-4 16th and had a bogey on the par-4 18th.

“Rough is really hard out there, so I try to keep in my fairway and try to keep it on the green,” Ji said. “I really focus on that.”

“I will admit there were a little nerves in there,” said Salas, the former Southern California player from Azusa. “It’s been a while since I’ve been in this position. But I was having fun out there just kind of taking what I could get. Mix of luck and momentum going. A lot of could haves, but I’m not going to dwell on that. Just going to be fortunate to be in this position again and just give it my all tomorrow.”

Anna Nordqvist had a 66 to top the group at 9 under.

Top-ranked Shanhan Feng (69) and Lydia Ko (70) were four strokes back at 7 under. Inbee Park, coming off a victory last week in the Founders Cup in Phoenix, was 6 under after a 68. Singapore winner Michelle Wie had a 68 to get to 5 under.

Brooke Henderson of Smiths Falls, Ont., was the top Canadian at 4 under after a third round of 73. Maude-Aimee Leblanc of Sherbrooke, Que., was at 2 under after shooting 74 on Saturday.