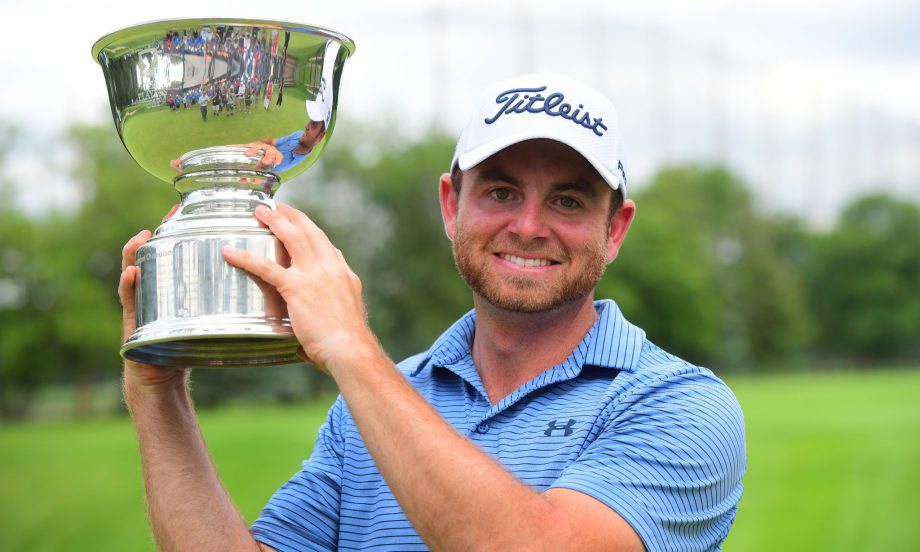 WINNIPEG – Syracuse, New York’s Dan McCarthy took his record-breaking season to new heights on Sunday, capturing the Players Cup to become the first player in the PGA TOUR-era on the Mackenzie Tour to win three times in a season.

The 30-year old shot a final-round 7-under 64 at Niakwa Country Club to win by seven over Olympia, Washington’s Cameron Peck and Burlington, Ontario’s Michael Gligic, guaranteeing himself a spot in The Five and Web.com Tour status for 2016.

“It feels amazing. It hasn’t fully set in and I’m kind of shaking here,” McCarthy said. “It never gets old, and it feels better every time. Each time is a new test, and I’m very happy with the way I did today.”

Entering the day with a five-stroke advantage, McCarthy cruised past a flurry of low scores around him by carding birdies on three of the first six holes, never letting his lead shrink to more than two shots. The Le Moyne College graduate went without a bogey over his final 36 holes.

“It wasn’t as easy as the score made it look,” McCarthy said. “That was my plan all day, to keep the foot on the gas. I knew guys were going to make birdies in front of me, and I figured if I went low, then it would be tough to catch me.”

The win adds another chapter to what has already been a record-breaking season, with McCarthy matching his own record for the lowest 72-hole total on the Mackenzie Tour, as well as the largest margin of victory, set earlier this season at the GolfBC Championship. In addition to becoming the first three-time winner in a season, McCarthy is the first player to surpass $100,000 in single season earnings, now sitting at $105,428 for the year.

“It’s a tremendous confidence boost to know that I can do it, even just once. Now three times is really, really special. All these guys out here that are playing well deserve to be at the next level and are good enough. Like myself, they just haven’t played well enough at the right time. It’s a huge confidence boost for me going forward.”

Now with a virtually insurmountable lead on the Order of Merit, McCarthy can turn his sights towards competing at the next level – including a start at the RBC Canadian Open in two weeks. Even with opportunities on the horizon, however, the fifth-year Mackenzie Tour veteran said past experience has taught him not to take anything for granted.

“I’m not going to change anything. I’m just going to continue doing the drills that I always do, that keep me going. I’m going to try to treat it as just another tournament. I’m sure when I get there the whole scene is going to be a bit unusual with the bigger crowds and all that, but I’m sure I’ll handle it okay.”

With the Players Cup win, McCarthy adds his name to a list of champions that includes PGA TOUR players Erik Compton, Graham DeLaet and a long list of other legends of the game, including Moe Norman.

“It’s extremely special. [Players Cup Executive Director Ryan Hart] was telling me during the trophy ceremony that Moe Norman’s name is on here four or five times, and I’ve studied a lot of Moe Norman’s swing, so it’s pretty special to add my name to the same trophy that he’s on.”

Seven shots back in a tie for second were Peck, who played in the final group with McCarthy, and Gligic, who recorded his best finish on the Mackenzie Tour in two seasons.

With a total score of 18-under par in a tie for second place, Burlington, Ontario’s Michael Gligic finished as the top Canadian on the leaderboard, earning Freedom 55 Financial Canadian Player of the Week honours and a $2,500 prize.