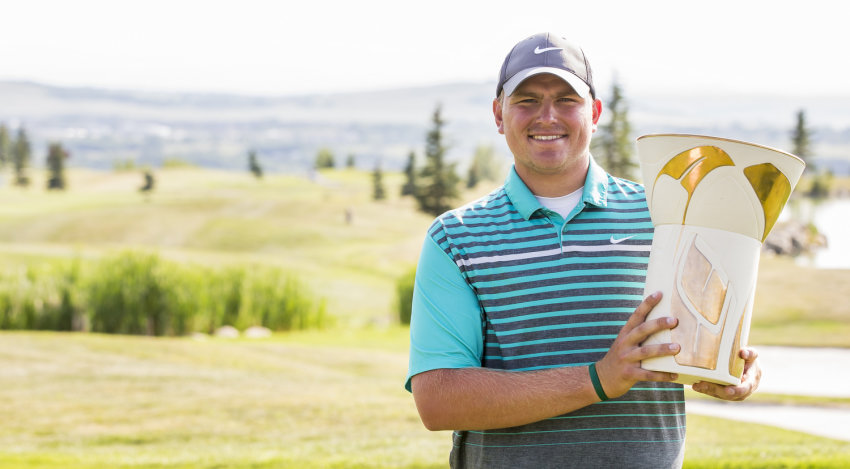 CALGARY – Santee, California’s Daniel Miernicki shot a final round 6-under 64 at The Links of GlenEagles on Sunday to win the ATB Financial Classic, his first Mackenzie Tour – PGA TOUR Canada win.

The three-time All-American at the University of Oregon rolled in a 35-foot birdie putt on the 72nd hole to finish at 17-under par, then looked on as the final four pairings failed to match his score, giving him the victory by a stroke over Sherwood Park, Alberta’s Danny Sahl and moving him to sixth on the Order of Merit.

“It was moving,” said Miernicki of his winning putt. “It was probably going to go five or six feet by and I was not gonna want to have that putt. When I saw it drop I was just so relived and excited and had all kinds of emotions.”

The second year Mackenzie Tour member, who has split time between Canada and the Web.com Tour this season, began the day four shots off the lead held by Moscow, Idaho’s Chris Williams, but quickly moved to the top of the leaderboard with two birdies and an eagle through his first six holes.

Four more birdies, including his dramatic finisher at the last, offset two bogeys coming in and gave Miernicki a 17-under total. A handful of competitors had opportunities to tie, but when Sahl and France’s Julien Brun were unable to produce eagles at the par-5 finishing hole, Miernicki was in the clear as the champion. Miernicki earned $31,500 for the win.

“At the beginning of the day I thought 18- or 19-under was going to win, but the course was set up tough,” said Miernicki, who admitted the win was a major breakthrough for his young professional career. “It’s been a little bit of a struggle for me. I would have liked to have this success right when I came out of school, but to have it happen now feels amazing. It’s my second year out here, and I’ve played well at times but I really haven’t felt the heat of really coming down the stretch and having a chance to win, so to pull it off feels amazing.”

“[Last year] I had three top-10s but my best finish was fourth and I ended up finishing 36th on the money list, and you really need top three finishes, let alone a win. Needless to say I’ll be playing the last five events hoping to finish as high as I can,” said Miernicki.

Sahl, a former Mackenzie Tour winner who caddies full-time for Mike Weir on the PGA TOUR, earned $18,900 for his solo second place finish along with Freedom 55 Financial Canadian Player of the Week honours. With the blessing of Weir, who is taking a personal leave of absence from the PGA TOUR, Sahl said he’s all in to resume his playing career and will take it as far as he can.

“I came into the week with low expectations, but I definitely believed in my game and my swing and what I was doing out there, and it paid off. It means I can still compete out here. I’m kind of an older guy and this is a young Tour now. I don’t recognize a lot of the faces, but I’m 35 and I’m in my prime right now so I’m ready to move forward with it,” said Sahl, who won the 2011 Syncrude Boreal Open presented by AECON.

Two shots back in a five-way tie for third was Adam Svensson, who has yet to finish outside the top three in three starts this season, along with Mackenzie Hughes, Julien Brun, Chris Williams and Jonathan Khan, who all posted season-best finishes on the Mackenzie Tour.