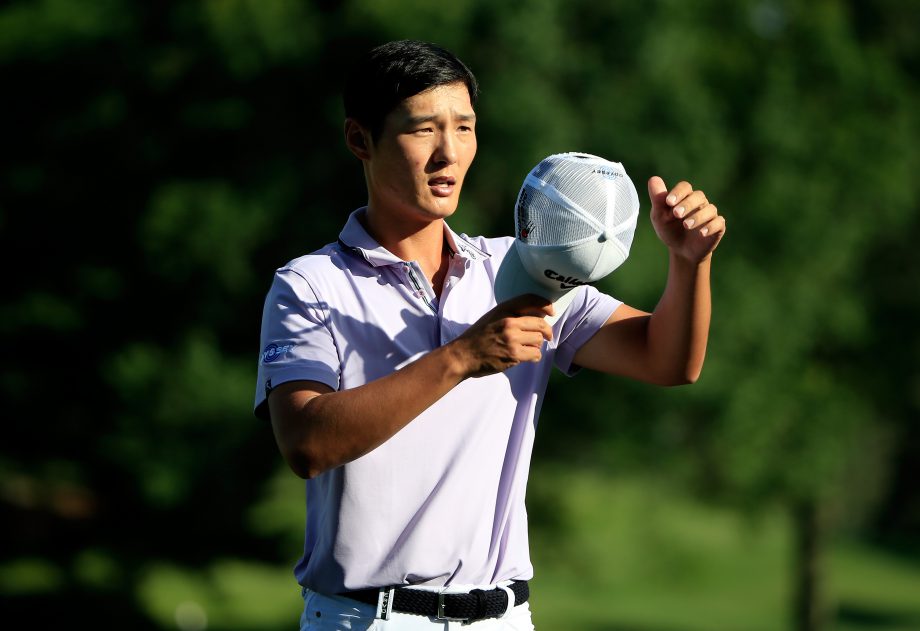 AKRON, Ohio – Graeme McDowell and Jordan Spieth were in good spirits Thursday at the Bridgestone Invitational, which was good news for only one of them.

McDowell has been in such a rut that he has fallen out of the top 50 for the first time in five years and hasn’t finished in the top 10 in America since playing this World Golf Championship a year ago. So he happily went along at Firestone South making five birdies in 10 holes on his way to a 4-under 66.

That left him one shot behind Danny Lee, who got his mistakes out of the way early and played a flawless front nine to lead the first round with a 65.

“I like this version of me today,” McDowell said. “It’s been a rough year, no doubt about it. Definitely been some time for reflection and some questions being asked of myself. It’s how you answer the questions and how you come out the other side, really.

“I feel like I’ll know what to do when I get back there, but it’s all about the process of getting there now,” he said. “So days like today will certainly help in that direction. I’ve got to keep doing it.”

Spieth was playing for the first time since he missed the British Open playoff by one shot, ending his bid at the Grand Slam. He expected a little rust. What concerned him was a sloppy start that was missing some of his fire. Walking up the fourth fairway, he said he told his caddie, “I need to get a little bit inspired right now.”

He made a bogey on par-5 second hole, the easiest at Firestone. His shot from the rough on No. 3 clipped some branches, and for a minute Spieth thought it might go in the water and lead to double bogey. It barely made the green and he got par.

“I’m staring at 3 over through three, trying to bounce back on a course that could host a major championship,” Spieth said. “I played these first three holes and it didn’t bother me. And that should normally bother me the way I played them.”

He made birdie on the next hole, a birdie on the final hole and shot 70. So did his playing partner, British Open champion Zach Johnson, in a pairing of the major champions this year. Johnson started birdie-birdie, only to come undone with a double bogey from the trees and rough on No. 9.

Spieth noted that he still hasn’t broken par at Firestone, though this was only his fifth round. And even par wasn’t a bad start.

The South Course featured fast fairways and firm greens, along with lush grass in the rough. Only 21 players in the 77-man field managed to break par. Phil Mickelson wasn’t among them. Spieth walked off the third green relieved that he cleared the water and made par. Mickelson was behind him and not so lucky. He clipped branches and went in the middle of the pond for a triple bogey. He shot 76.

Jim Furyk might get another chance to win a tournament he should have three years ago, when he went wire-to-wire until making a double bogey from the middle of the 18th fairway in the final round and lost by one. Furyk opened with a 66 to join McDowell one shot out of the lead.

Rickie Fowler and Justin Rose were at 67, while the large group at 68 included Henrik Stenson, Ian Poulter and Lee Westwood.

McDowell has three straight rounds of 66 at Firestone, though two of them were last year in softer conditions. This was a tricky test with the extra bounce on fairways and greens, and it was a big step for McDowell. It required getting the ball in play, some good wedge work around the greens and making putts. That’s been his hallmark, and he relief on those parts of the game to carry him in the opening round.

The slump is mainly due to change at home. His first child was born last September, and McDowell has found it harder to leave home. His motivation waned, followed by his game and inevitably some confidence.

He is at No. 159 in the FedEx Cup and in danger of missing the playoffs. But he found one answer even before he got to Firestone.

“Probably the hardest question was, `Do I still want to grind and be out here? Do I still want this?’ It was an easy answer. Yeah, I do want it,” McDowell said. “If this all went away, I’d miss it very badly. So when you answer that question positively, then you’ve got to start kind of answering all the other questions. How do I get myself back to where I need to be? And it starts with technique, and it starts with hard work and motivation and kind of all the things that I’ve done in the past.”