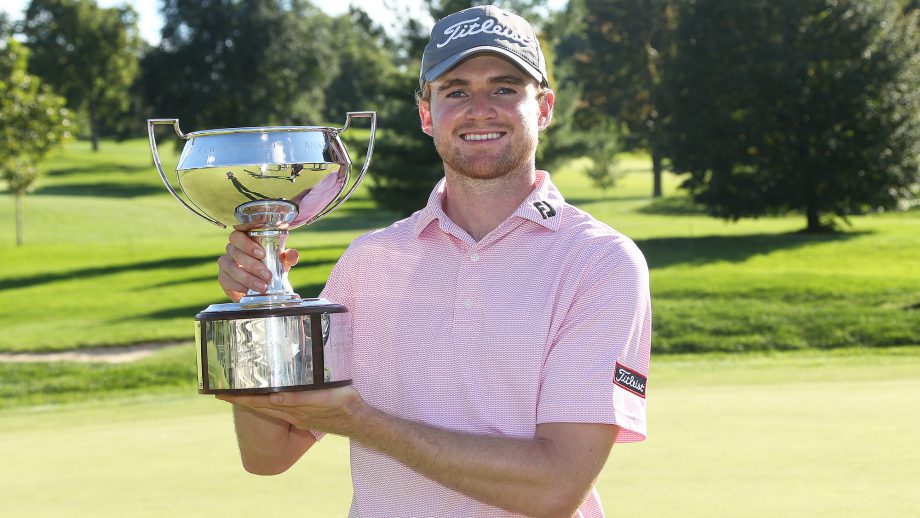 LONDON, Ont. — Coming into the day four strokes off the lead, Danny Walker made five birdies on the front nine and picked up his first professional win at the Freedom 55 Financial Championship at Highland Country Club by two strokes.

The win vaults the University of Virginia grad all the way up from No. 51 on the Order of Merit to No. 7, exempting him into the final stage of 2019 Web.com Tour Qualifying School later this Fall.

“It’s a huge relief not to have to worry about the first or second stage of Q-School,” said the 22-year-old, just four months removed from turning professional. “It’s nice to have a little more time to relax, and maybe take a week or two off after this, everything is about moving up the ladder, so it’s pretty exciting.”

Walker only made one bogey during the tournament, on the tough hole No. 16 on Thursday, and carded rounds of 63-68-66-64 to pick up the win.

“I knew I had it in my because I’ve been hitting it well all week,” said Walker. “I just needed to keep hitting them like I had been, and then make some putts, which I did. I made some good putts on the front nine to really get my round going there.”

On the outside looking in, Walker quickly moved his way up the board on Sunday, making five birdies between hole Nos. 3-9 on the front to make the turn in 31. One more birdie on the back allowed Walker the opportunity to casually two-putt for par on No. 18, and, barring a hole-out from the final group, assured him the victory.

“I don’t even know what to think yet,” said the Bradenton, FL native. “I was pretty nervous coming down the stretch, I didn’t know where things stood until I got to 17 green and saw I was leading by one.

“I didn’t think about it too much and just tried to put one more birdie in there to distance myself a little bit, but overall it was a really solid day, I’m happy with how I played under the pressure.”

Michael Gligic won the Freedom 55 Financial Canadian Player of the Year award and the $25,000 bonus that goes along with it, placing 16th on the Order of Merit in the process.