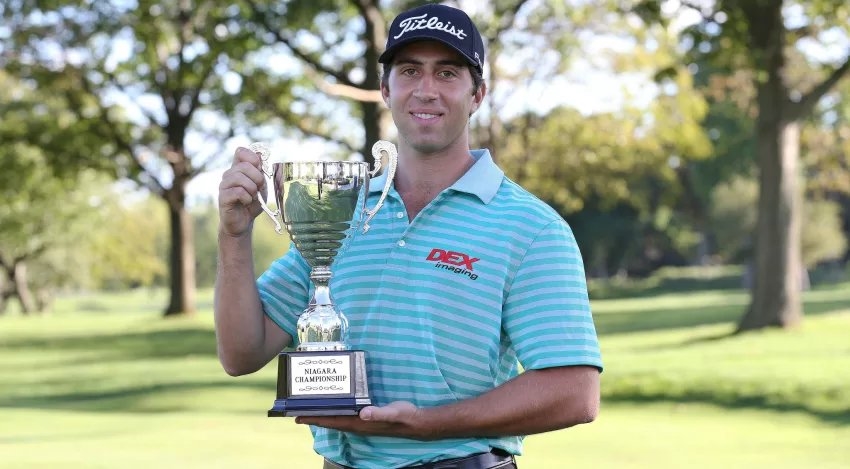 The 24-year old University of Virginia grad got up-and-down from just short of the par-5 18th green for birdie, sinking a 5-foot putt to defeat Dan McCarthy of Syracuse, New York – who secured the 2016 Order of Merit title – by a stroke.

“I didn’t see this coming. I’ve been working really hard for a long time, and I felt like it was around the corner at some point, but there were really no signs to point to this week. I’m still in shock,” said Pastore, who was making just his third start of the season after missing most of the 2016 season with a wrist injury.

Starting the day tied for the lead with Tahiti’s Vaita Guillaume, the University of Virginia grad found himself trailing McCarthy quickly out of the gate after the Order of Merit leader birdied his first three holes to take the lead by two. But while McCarthy looked to take control, Pastore quietly kept pace with birdies on the fourth and fifth before adding a long birdie putt at the ninth to regain the lead on his own.

But even as he pulled away, Pastore couldn’t shake McCarthy, who looked to add an unprecedented fifth win to his record-smashing 2016 season on Sunday. At the 18th, McCarthy drained a slick 18-footer for birdie to post the clubhouse lead and tie Pastore at 13-under.

“That was a really greasy little putt,” said McCarthy. “If it didn’t go in it was about 12 feet by, and I didn’t hit it that hard. It just barely got over the slope, but it was all or nothing at that point and I had nothing to lose. I was trying to put some pressure on him.”

With the scene unfolding right in front of him, Pastore knew where things stood and what was at stake.

“I heard he had birdied, and he wasn’t going to make it easy on me,” said Pastore. “I wanted to give myself a putt. I figured if I hit two solid 3-woods up around the green, I could give myself a chance.”

After executing the first two parts of his plan to perfection, Pastore did his best to keep the thoughts of what an up-and-down would mean out of his head. A birdie would change his season from a wasted year to a crowning achievement, and he knew it.

“You’re thinking of so many scenarios. ‘What if I do this? What if I do that? How can I mess that up?’ You have to take it one shot at a time and put all those thoughts out of your mind, and it was not easy. It was very uncomfortable,” admitted Pastore.

The chip was executed well, and the putt was even better. After leaving himself a delicate 5-footer, Pastore poured the putt right in the middle of the hole, pumping his fist as he secured his first professional win.

“I gave myself that putt that I wanted, and I’m happy it went in,” Pastore said.

With the win, Pastore moves from 143rd on the Order of Merit to 13th, turning the tables on a lost year. The helplessness of sitting out and watching from afar had been getting to him, unable to keep doubts about his future from creeping into his mind.

“It’s been incredibly frustrating. To have status up here and not be able to play, I couldn’t even look at the leaderboards at the beginning of the year because I wanted to be out here so badly,” said Pastore. “When you’re not playing, there’s always doubt about ‘am I ever going to play again?’ Health is a fickle thing, and as a professional golfer it’s my livelihood.”

For McCarthy, the disappointment of finishing second quickly washed away. Though it seemed inevitable throughout the year that he would claim the top spot on the Order of Merit, he was not mathematically guaranteed to do so until today. He’ll be fully exempt on the Web.com Tour next year thanks to a season that has seen him win four times and set numerous records, including a new mark set today: the all-time single season earnings record with $156,783.

“The goal at the beginning of the year was top five, and it’s hard to expect yourself to go out and win the money list. It’s really, really nice to be able to go into London and have a relaxed week and have some fun,” said McCarthy.

Four shots behind Pastore in a tie for third were Brock Mackenzie, Jonathan Garrick and Talor Gooch.

With a second place finish this week, Dan McCarthy officially secured the 2016 Order of Merit title, earning exempt status on the Web.com Tour for 2017. Following McCarthy’s win last week at the Cape Breton Open, the only remaining scenario in which McCarthy could not win the season-long money list would have required Taylor Moore to win the season’s final two events.

With a total of $156,783, McCarthy also secured the all-time earnings record on the Mackenzie Tour. McCarthy had already set the earnings record for the PGA TOUR-era, and surpassed the previous record of $156,119 set by Aaron Goldberg in 2010.

With a total score of 6-under par in a tie for 11th, Church Point, Nova Scotia’s Austin Connelly finished as the top Canadian on the leaderboard, earning Freedom 55 Financial Canadian Player of the Week honours and a $2,500 prize. Connelly also captured the honour earlier this year at the ATB Financial Classic.