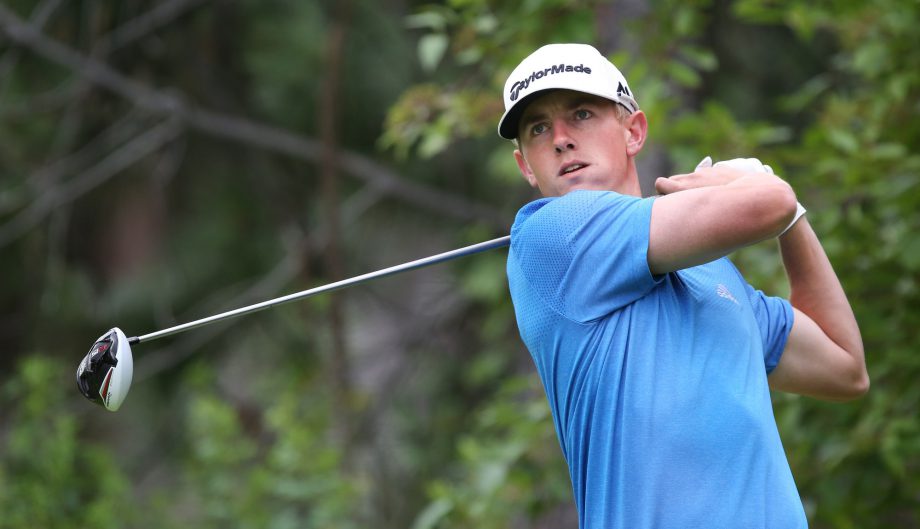 Davis, a 22-year old who turned professional in 2016 after a stellar amateur career, went out with a 4-under 31 on his first nine holes before stumbling to a double bogey at the ninth hole (his 18th) to fall back into a share of the lead with Clark and Knapp.

“I was pretty happy with the way I’ve played. A bit disappointing to finish the way I did, but I’ve got a lot of positives to draw on,” said Davis.

Davis wasn’t the only one to experience a few errors on Wednesday, as Soboba’s small, tricky greens provided a stout challenge on a day when no player went without a bogey. Knapp stumbled with a double and a bogey over his final four holes, while Clark bogeyed the 16th and missed makeable birdie putts on his final two holes. Still, Clark, a University of Oregon Senior, was optimistic about his prospects with two rounds to go.

“I left a lot of shots out there, but all-in-all I’m excited about how my game feels and how I played,” said Clark.

The trio will tee off together on Thursday at 1:39 p.m. in round three’s final group.

BACKGROUND ON THE LEADERS: Davis turned pro in 2016 after a standout amateur career that included individual wins at the 2015 Australian Amateur and 2016 World Amateur. He narrowly missed out on earning a spot in The Masters after finishing second at the 2015 Asia Pacific Amateur.

Upon turning pro, Davis made a splash by finishing T15 after earning an exemption into the PGA TOUR’s OHL Classic at Mayakoba.

Clark comes into the week as the No.1 player in Golfweek’s Men’s Collegiate Individual Rankings on the strength of two individual wins for the University of Oregon. The Colorado native looks to follow in the footsteps of former Oregon Duck Aaron Wise, who played Mackenzie Tour Q-School in 2016 as one of the highest-ranked collegiate players in the nation, going on to earn medalist honours before winning both the NCAA Championship and then the Syncrude Oil Country Championship presented by AECON, ultimately earning a spot in The Five and status on the Web.com Tour.

Knapp, a 23-year old who played his way on to the Mackenzie Tour last year after being one of the top three non-members after the first re-shuffle of the 2016 season, played college golf at UCLA, where he secured two individual wins before turning pro in 2015.

“I really think Canada helped me out last year. I’m a different player now. Those are different golf courses up there and you’ve got to keep the ball in play, and it’s nothing like you get in California.” – 2016 Mackenzie Tour member Michael Tolladay, who bounced back from an opening 79 with a second round 64

“As long as I’ve been out here, you’re going to have times where you string a couple of birdies together, everything’s great and you’re happy as can be, and all of a sudden you throw a couple of bogeys together. That’s golf. It was a really tough day.” – Former Players Cup champion Chris Killmer on having a patient mindset at Q-School.

“It helps having a few rounds in a row to build some momentum. I’ve still got 36 holes to go, so we’ll continue seeing where it goes.” – Cameron Davis on rebounding from his disappointing finish on Wednesday for the final two rounds.

26-year old Jared Sawada played collegiate golf at the University of Hawaii at Manoa. He has played in the PGA TOUR’s Sony Open in Hawaii twice, including a T69 finish in 2017.