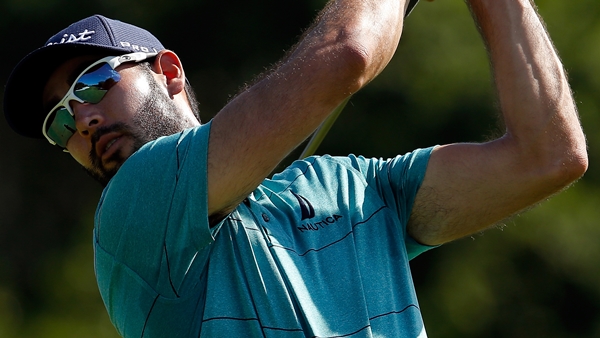 NAPLES, Fla. — Jason Day and Cameron Tringale shot a 17-under 55 on Thursday in the first-round scramble to take a two-stroke lead in the Franklin Templeton Shootout.

“The abridged version is, I hit first and then let Jason loose,” Tringale said.

Day and Tringale tied the tournament scramble record set by tournament host Greg Norman and Nick Price in 1993 and matched by Peter Jacobsen and John Cook in 1998 and Norman and Steve Elkington in 2005.

“Scramble is one of those formats where you have to go at it and shoot lights out,” Day said. “It definitely helps when you have a partner who hits it down the middle all the time and putts great.”

“It’s great to be able to read the putt together, really put our minds together, because he’s a great putter,” Day said. “He always has been.”

Defending champions Matt Kuchar and Harris English opened with a 57. They birdied 14 of their last 15 holes.

All 12 teams were 11 under or better. The teams will play a modified alternate shot Friday and close with a better-ball round Saturday.

English thinks they separated themselves last year in the modified alternate shot.

“I feel like we can do the same thing as we did last year,” English said. “Kooch is driving it great right now, so we’re going to kind of lean on that.”

Keegan Bradley-Camilo Villegas, Graeme McDowell-Gary Woodland and Ryan Palmer-Jimmy Walker shot 59, while the team of Mike Weir and Retief Goosen, who have three Major championships between them, carded a 12-under 60.

“We are really fortunate that she is OK and lucky that I was in the room with her to save her from drowning,” Reed said

Reed, a late replacement for Chris Kirk, teamed with Brandt Snedeker to shoot 61. They were tied for 10th.