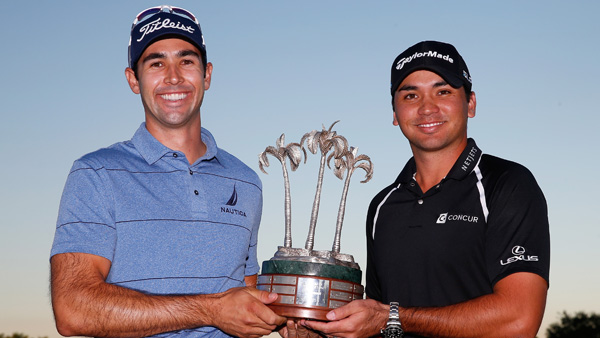 Leading by three shots going into the final round, they had just one birdie in the first eight holes before closing with six in their last nine.

“He hit a lot of good, clutch putts,” Day said about Tringale.

“Once I holed that putt, we started very well on the back nine,” Day said.

Day and Tringale opened with a 55 on Thursday in the scramble round and shot a 64 on Friday in modified alternate-shot play.

Matt Kuchar and Harris English, the 2013 winners, finished second after a 62. Kuchar just missed an eagle chip on No. 17.

“It came awfully close,” he said. “I thought it was in. It was hard looking at the sun, I wasn’t sure on the depth where the hole was but it had a great line and pretty good pace as well.”

English then hit his approach shot 2 feet from the cup on No. 18

The teams of Billy Horschel-Ian Poulter and Keegan Bradley-Camilo Villegas tied for third at 29 under.

Saturday’s action included momentum swings, numerous ties for the lead and memorable shots off the green. At the same time Steve Stricker and Jerry Kelly birdied eight of nine holes, Day and Tringale went birdieless on seven of their first eight holes, as did Graeme McDowell and Gary Woodland, who came into the day in second place.

Three hours into the tournament, there was a three-way tie at 25-under with nine teams within three shots. An hour later, six players were within a shot of the lead. With birdies from Nos. 9-13, Day and Tringale regained control.

(A previous version of the story incorrectly listed Kuchar’s near eagle chip as final hole instead of 17th hole.)

Mike Weir and Retief Goosen finished in last place with a score of -15 for the week.