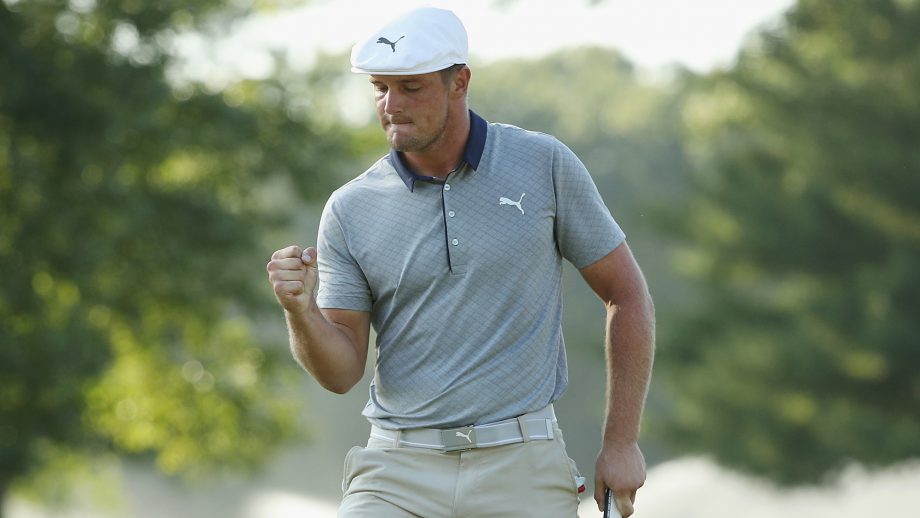 NORTON, Mass. – Bryson DeChambeau plays golf differently from everyone else and is getting the results everyone wants.

It doesn’t take a scientist to figure that out.

For the second straight week in the richest part of the PGA Tour season, DeChambeau took down one of the strongest fields of the year by playing his best golf on the weekend to win the Dell Technologies Championship, becoming only the second player to capture the opening two playoff events in the FedEx Cup.

He closed with a 4-under 67 on Monday, making three straight birdies to close out the front nine and keeping his distance the rest of the way for a two-shot victory over Justin Rose on the TPC Boston.

“I wouldn’t have written it any better, to be honest with you,” DeChambeau said. “I’ve been playing some great golf this whole year. And I knew it was a matter of time before something cool showed up.”

Vijay Singh won the opening two FedEx Cup events in 2008, when the points system was different and points were not reset before the final playoff event. That allowed Singh to effectively wrap up the $10 million prize early.

DeChambeau, with his third victory this year, was assured of being the No. 1 seed when he gets to the Tour Championship, no matter what happens next week at the third playoff event outside Philadelphia.

And he would appear to be a shoo-in to be one of U.S. captain Jim Furyk’s three Ryder Cup picks to be announced Tuesday. The idea is to find the hottest player to fill out the team, and no one has been close to DeChambeau over the last two weeks.

The 24-year-old Californian is known as the “Mad Scientist” for his approach to the game, from his single-length clubs (34 inches, roughly the length of a 7-iron), to his work on biomechanics to the calculations that go into every shot.

Nine calculations, to be exact.

DeChambeau doesn’t want to give away all his secrets, but they range from yardage and wind to air pressure and adrenaline.

“He’s facing the biggest and best fields,” Rose said. “There’s a lot of conjecture about how he goes about it. But when he delivers as he is now, it just proves it.”

How much better can he get?

“You can always get better,” DeChambeau said. “How much? I would say it depends on what I can do in the restrictions of my biomechanics. So it’s all about error tolerances and being … less sensitive to error. So that when you do feel like you mess up, it’s not going to be that big of a mess-up. I hope that makes sense.

“But I can say there is another level.”

Canadian Adam Hadwin started his final round strong before settling with a 1-under 70 to finish 8-under in a tie for 21st.

The Abbotsford, B.C., native birdied three of his first four holes Sunday and reeled off 11 straight pars before back-to-back bogeys on No. 16 and No. 17 dropped him back two strokes.

Starting the final round one shot behind Abraham Ancer, and among 10 players within four shots of the lead, DeChambeau had a two-putt birdie from 50 feet on No. 7, took the lead with a 12-foot birdie putt on the 220-yard eighth hole, and then hit his approach to 6 feet to a back right pin at No. 9 for his third straight birdie.

Cameron Smith of Australia tried to make a run at him with a pair of late birdies, but DeChambeau answered with a birdie on No. 15 to keep his lead at two shots. Needing an eagle to catch him on the par-5 18th, Smith came up short and into the hazard and made bogey.

Rose birdied three of his last four holes for a 68 and wound up alone in second.

Ancer couldn’t keep pace, dropping three shots in the tough four-hole stretch early on the back nine. The 27-year-old Mexican hit into hazard on the 18th and finished with a bogey for a 73. The small consolation for Ancer was moving from No. 92 to No. 56, which at least made him among the top 70 who advance to the BMW Championship at Aronimink.

A few others also were happy to have another week left in a long season.

Matt Kuchar failed to advance beyond the second playoff event for the first time in 10 years, meaning he won’t get another chance to state his case as a potential Ryder Cup pick. Furyk makes his fourth selection after the BMW Championship.

The likely choices Tuesday would seem to be DeChambeau, Phil Mickelson and Tiger Woods – they finished Nos. 9, 10 and 11 when qualifying ended for eight automatic berths after the PGA Championship. Woods closed with a 71 and tied for 24th. Mickelson, who has played on every Ryder Cup team since 1995, boosted his case by winning a World Golf Championships event in Mexico in March, and he made nine birdies Monday in a closing round of 63.

“So fortunate also that it’s the day before the Ryder Cup picks, although I don’t feel that should be a bearing,” Mickelson said. “I think you have to look at the big picture through the course of the year statistically. … But it certainly doesn’t hurt.”