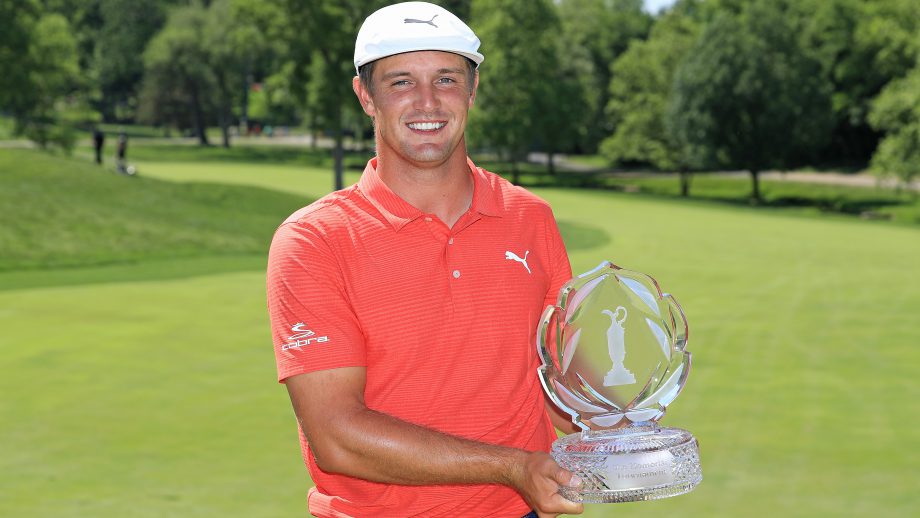 DUBLIN, Ohio — Bryson DeChambeau finally got it right on his third try at the 18th hole and won the Memorial in a playoff on Sunday.

DeChambeau three-putted for bogey on the 18th for a 1-under 71 to get into a three-way playoff at Muirfield Village. He missed the green from the fairway on the 18th on the first extra hole and had to scramble for par. On his third try, he hit his approach to 12 feet behind the hole and made it for birdie to beat Byeong Hun An and win for the second time on the PGA Tour.

“I can’t believe I did it,” DeChambeau said.

Kyle Stanley ran off four straight birdies toward the end of his round until his final tee shot caromed off a tree and across the fairway into deep rough. He made bogey for a 70 and still got into a playoff, but he was eliminated on the first extra hole when his approach from deep rough and the ball well above his feet squirted to the right , leading to a bogey.

Tiger Woods was never a serious factor. Starting five shots behind, Woods pulled to within three shots with a two-putt birdie on the par-5 fifth hole. But his chances effectively ended when he missed a 3-foot par putt on No. 10, and he put his tee shot into a backyard for the second time this week. He closed with a 72 and ended one of his best ball-striking weeks in a six-way tie for 23rd.

Woods was second-to-last in the key putting statistic among the 73 players who went all four rounds.

“If I just putt normally, I probably would be right there with those guys and up there in the last couple of groups,” Wood said. “If I just keep building on this, with how I’m hitting it right now, I’m in good shape for two weeks from now.”

The next stop for Woods is the U.S. Open at Shinnecock Hills.

Patrick Cantlay also had a chance on Sunday, leading by two shots going to the back nine. But he didn’t make a birdie over his last 10 holes, and he fell back when he went bunker-to-bunker on the 17th and made bogey to fall two strokes behind. Cantlay narrowly missed a 25-foot birdie putt on the final hole, shot 71 and finished fourth. Peter Uihlein (66) was alone in fifth.

Joaquin Niemann, the 19-year-old from Chile, birdied the 18th hole to tie for sixth. That was enough for him to earn special temporary membership on the PGA Tour, meaning he can get unlimited sponsor exemptions.

Justin Thomas shot 68 and tied for eighth in his debut at No. 1 in the world. He will keep that ranking going into the U.S. Open.

Woods was finishing when a long final round took shape over the last few holes.

Cantlay’s lead evaporated quickly. DeChambeau pulled within one shot with a birdie on the par-5 11, and he took the lead with a two-shot swing on the next hole with a birdie as Cantlay made bogey from the bunker. Stanley hit into the water and made double bogey and looked to be done.

Except that he wasn’t.

Stanley ran off four straight birdies, the last one from 30 feet to tie DeChambeau for the lead. And then one bad break nearly ended it for Stanley.

His tee shot was close to ideal until it caught a tree limb and caromed across the fairway, and only the ankle-deep rough kept it from going in the creek. He walked toward the tree and couldn’t believe where the marshals told him it was. He did well to advance it 100 yards down the fairway, and he missed a 15-foot par putt.

DeChambeau failed to take advantage, however, three-putting from 55 feet to fall into the three-way playoff.

On the first extra hole, DeChambeau was the only player in the fairway and missed the green to the right. He had at least chipped close enough to make par, and An joined him with a nifty chip from behind the green and straight down the slope, the ball grazing the edge of the cup.

Stanley was eliminated, but not without one last try. After his ball squirted out some 30 yards, he was still in deep rough and came up short, and his pitch for par hit the cup and hopped a few feet by.

An nearly got away with his mistake on the second playoff hole, which he pulled into the gallery. He hit a flop shot to a few feet and was certain to get par when DeChambeau ended it with his birdie putt.