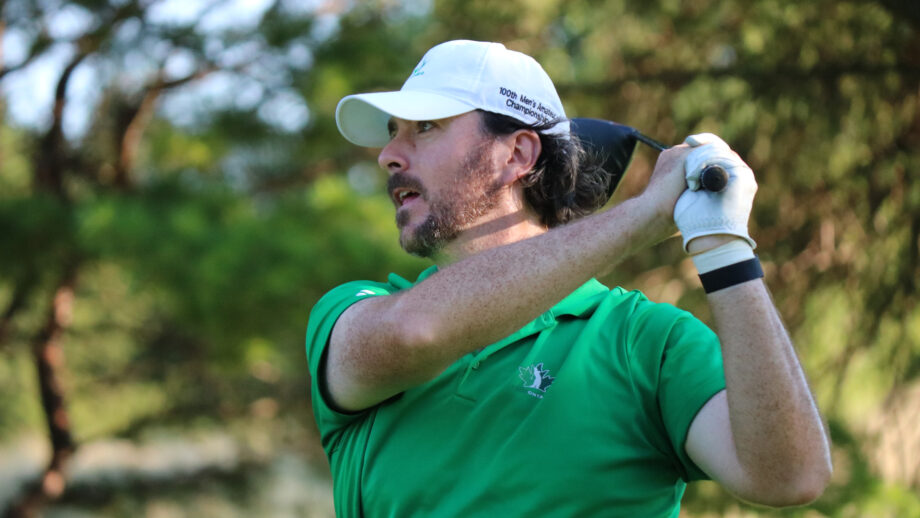 THORNHILL, Ont. – Mother Nature put a damper on Monday’s practice round, but skies were clear as day for the opening round of the Canadian Men’s Mid-Amateur Championship, presented by BDO, on Tuesday at The Thornhill Club in Thornhill, Ont.

Charles Fitzsimmons used the home course advantage conveniently, carding a bogey free, 2-under-par 68 to grab a share of the lead.

“It was a really, really good day,” said Fitzsimmons. “The pins were in some really good spots and the wind was blowing for most of the round so it was a challenge. Felt fortunate to be able hit some good spots and be able to play a pretty solid round.”

The 35-year-old knows how to win this tournament. In 2021, his final round 67 propelled him into the winner’s circle at Fort McMurray Golf Club and with a lot of golf left to play, Fitzsimmons knows it’s not about how you start the tournament, it’s how you finish.

The Western University graduate played his junior golf at The Thornhill Club and won a club championship here in 2005. Today, his status remains active at the Club as an out-of-town member. Results aside, Fitzsimmons says he’s just excited to be back home.

“This place is really, really special to me,” said Fitzsimmons. “It’s been a huge part of my life in golf and any chance I get to compete here is such an amazing opportunity. To be able to compete here as the defending champion is pretty special, so I’m pretty happy just being able to be here and enjoy it and to play like today was just icing on the cake.”

Fitzsimmons made consecutive birdies on holes 17 and 18, his ninth and tenth holes of the day, and the rest of his scorecard was clean as a whistle.

Zachary Hallborg of Welland, Ont. matched Fitzsimmons’ low score of the day, rolling in six birdies to earn a stake of the lead. Hallborg, who plays out of Cardinal Lakes Golf Club, caught fire in the early stages of his round, making five birdies and two pars through a seven-hole stretch, but dropped a few strokes coming in.

Steven Jackson and Brett McKinnon fired rounds of 1-under-par 69 and sit one shot back of the leaders ahead of Wednesday’s second round. Jackson’s five birdies on the day were tied for the second most behind Hallborg.

Three-time champion Garrett Rank is tied for fifth after an even-par 70. Joining Rank in the T5 position are Sam Harris, Ryan Sevigny and Jesse Galvon.

John Walsh leads the Mid-Master division – a separate division for players 40 and over – by one stroke. The Prince Edward Island native shot a 1-over-par 71 in the opening round.

Nova Scotia owns a one-stroke advantage in the Interprovincial Team competition over Alberta and Ontario. McKinnon’s 1-under and Leon Carter’s 3-over contributed to the total team score of 2-over-par 142. The team event will conclude following tomorrow’s second round with the winner being award the Bruce Forbes Trophy.