DeLaet tied for fifth through 18 at Honda Classic 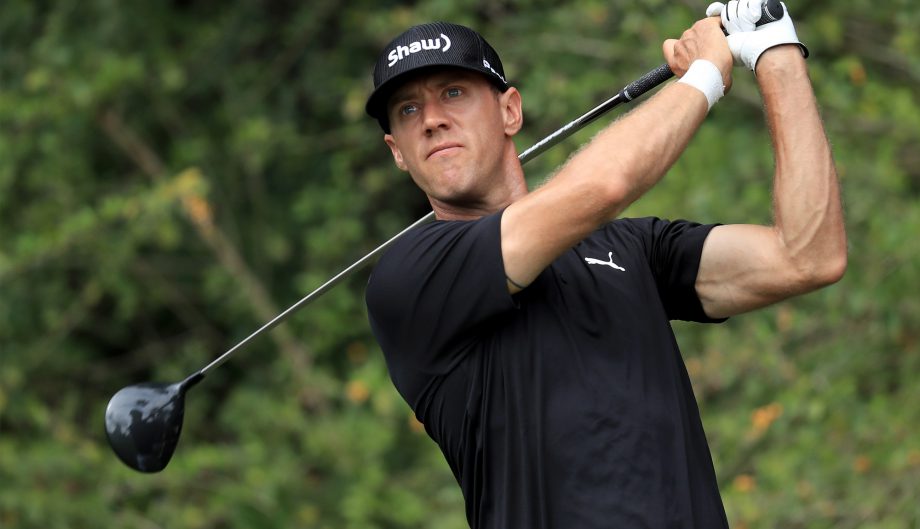 PALM BEACH GARDENS, Fla. – One reason Martin Kaymer enjoys the Honda Classic is because he doesn’t feel as though he has to make a bunch of birdies.

On such a serene Thursday at PGA National, that was required to keep pace.

A pair of PGA Tour rookies who last played this course at Q-school for the Web.com Tour, Cody Gribble and Wesley Bryan, each opened with a 6-under 64 in the morning and it stood the rest of the day. The wind never really materialized. The greens remained soft from a big rain the day before.

More than half of the field was at par or better.

Kaymer, a two-time major champion from Germany playing on a sponsor exemption, chipped in from behind the 17th green for birdie and closed with a two-putt birdie from 40 feet for a 65. He was one shot behind, along with Anirban Lahiri of India.

“I felt very calm over the ball,” Kaymer said. “I enjoy the golf course. When you stand on the first tee, you don’t feel like you need to make five or six birdies. It’s a ball-striking golf course, but even level par or 1-over par is a very good round.

“It was very soft and there was not much wind,” he said. “Once you miss the fairway, it was actually OK from the rough because the greens are soft. I’ve not played the golf course in easier conditions.”

Graham DeLaet of Weyburn, Sask., Rickie Fowler and Ian Poulter found it the same way. They were part of a large group at 66. Sergio Garcia was headed in that direction until he pulled his tee shot left on the par-3 fifth hole and made double bogey, added a pair of other bogeys and recovered with a birdie on his final hole for a 68. He was in the group with defending champion Adam Scott.

Mackenzie Hughes of Dundas, Ont., and David Hearn of Brantford, Ont., were at 1-under 69.

“If the weather stays good and it’s able to dry out, I don’t see the golf course getting any easier,” Fowler said.

It was an important start for Poulter, who is playing on a medical extension from a foot injury last year and has only six PGA Tour events left to earn either $220,301 or 154 FedEx Cup points to retain his full status.

“I’m on borrowed time,” said Poulter, who has slipped to No. 206 in the world. “A win would be nice. I have to think that I’ve got a chance, I really do. The situation I’m in, I have to be aggressive, but I’ve got to be careful. I can’t make many mistakes.”

Bryan is coming off his best tournament, a tie for fourth at Riviera in which he got within two shots of Dustin Johnson toward the end of the third round. It took him awhile to get going in warm, calm weather, and he finished with a 30 on the front nine.

Gribble already has won this season at the Sanderson Farms Championship last fall while the top players were in Shanghai. He missed four straight cuts on the West Coast and finally got his swing back to where he wants it. Along with birdies on three of the par 3s, he hit all 18 greens in regulation.

Bryan, still more known for the trick-shot videos he makes with his brother, can feel his confidence starting to grow.

And it helped to be on familiar turf.

“I think the comfort out here this week … yeah, I got into some pretty good form, but out here on the golf course, I got through Q-school just about 14 months ago, and it’s a place that I’m comfortable at and a golf course I know,” he said.

He picked up a rare birdie on the sixth hole, one of two that have been converted from par 5s to par 4s for the Honda Classic, followed that with a 12-foot par save and then a 10-foot birdie on No. 8 to join Gribble in the lead.

Gribble’s PGA Tour journey started a year earlier than Bryan’s. He tied for eighth at Q-school in December 2014 to get onto the Web.com Tour. He did well enough in the final event to earn his card, and a month later he was a PGA Tour winner.

“This is one of the tournaments I like to play,” Gribble said. “I played it well in Q-school a couple years ago. I’ve got some good memories.”

There weren’t a lot of good memories over the last month, missing the cut in three straight events starting with the Phoenix Open. But the Texan has been grinding away with his coach the last few weeks and it’s starting to take hold.

“We both know exactly how we want the ball to come out. We want less curve. I tend to draw it too much,” Gribble said. “I know we wanted more a cut swing, but kind of finally … it’s hard to explain. It clicked today, but it could be lost again tomorrow. You never know. It was a great start, and hopefully I can build on it.”

It helped to have a birdie putt on every hole. His lone bogey was a long three-putt on the 16th hole.