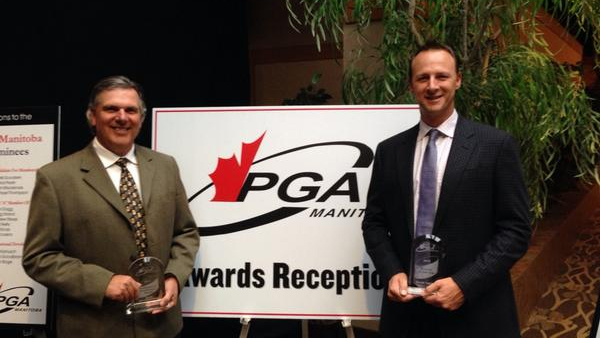 Another season over – another award for Winnipeg’s Derek Ingram. Team Canada’s Men’s National Team Coach was back in his hometown to receive the Teacher of the Year honour from the PGA of Manitoba for the seventh time in his career.

Ingram, also a Manitoba Golf Hall of Fame member, is coming off a very successful year with Team Canada which saw all five members of the Men’s National Amateur Team crack the World Amateur Golf Rankings (WAGR) Top 100 – that achievement had not happened before in the program’s 10 year history.

Although very modest, Ingram does share a great sense of pride in the accomplishments of the Team Canada program in 2013/14.

“I feel very honoured to be recognized with this award again and it motivates me to remain focused on hopefully another great season” said Ingram. “In regards to the National Team, we probably had the best results and the best year to date. I do feel a lot of pride and satisfaction in helping the guys develop and get the results that they deserve.”

New this year, Ingram also took on additional responsibilities with Golf Canada as the coach of the Men’s Young Pro Squad, an initiative created to assist Canada’s young professionals in the journey from amateur golf to the professional ranks.

Aside from coaching Team Canada, Ingram teaches out of the Elmhurst Golf & Country Club in Winnipeg, where he is the Head Teaching Professional. His teaching roots run deeper at the national level as well, where he helps facilitate National Coaching Certification Program (NCCP) training at the PGA of Canada offices to fellow members.

He has also been recognized as the PGA of Canada’s Teacher of the Year award two times (’03, 07).