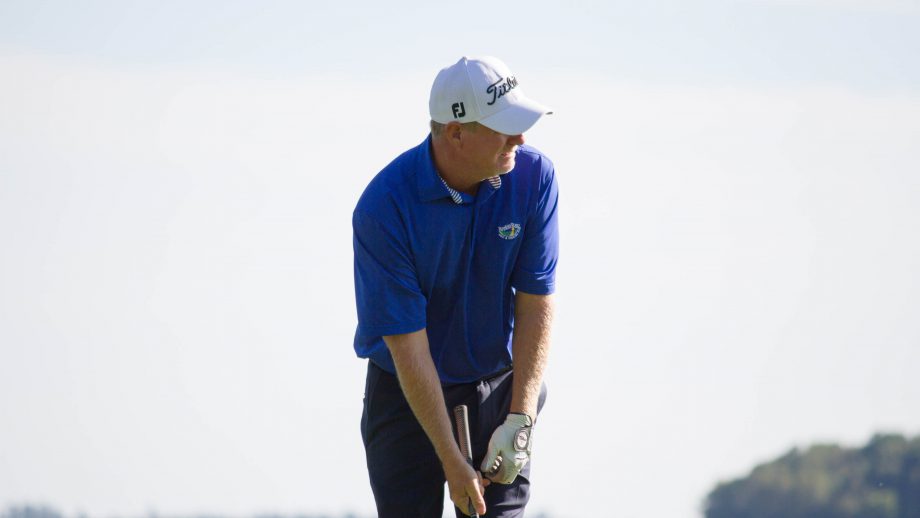 BATHURST, N.B. – Peter Detemple and Brady Exber were the only players in the red at the end of the first round of the 2018 Canadian Men’s Senior Championship at Gowan Brae Golf & Country Club.

It was a sunny blue bird day with a little wind which was proving to throw off some players, but not Detemple.

“It was a beautiful day, perfect enough breeze for the mosquitoes to keep away. You know, the wind is your friend in golf, you use it. It wasn’t overly windy, it was a normal wind,” said the Vancouver native.

Detemple opened with two birdies on his front nine but struggled with his putter on hole 10 as he made the turn.

“I missed a 12-inch putt on 10, I tapped it in and missed it. I was standing there like ‘what the heck’ that don’t happen,” Detemple laughed.

He didn’t let that stop him. The Lexington Park, MD., resident continued to card two more birdies against two bogeys to finish 1 under.

“I played conservative, I kept it in play today, that was my goal. You don’t want to shoot yourself out,” said the 56-year-old.

Unlike Detemple, Exber had a rough start to the tournament when he arrived in Bathurst, but his clubs did not. Exber was one of many players whose clubs didn’t make it for the practice round, but thankfully arrived just on time for the beginning of the championship.

“I’m really happy, I didn’t have my own clubs until today, so I just didn’t want to get off to a bad start,” said the Las Vegas native. “I wanted to get in the feel of the golf course because I didn’t really know how far the ball was going with my own equipment. It took me a few holes to kind of get going, but I did get off to a good start.”

The 62-year-old had a similar opening round to Detemple recording two birdies. Exber made the turn–also recording a bogey on hole 10 and a birdie on hole 11–and recorded an eagle on hole 14 after a chip-in just off the green.

Canadian Golf Hall of Fame Honoured Member and 2014 Champion, Doug Roxbough, leads the Super Senior (65 years +) Division by two strokes over Lars Melander from Oakville, Ont. and Mike Hosford from Dieppe, N.B. Roxbough recorded a 2-over-74 in Tuesday’s round.

Defending champions, Team Alberta, has a share of the lead with neighbouring province, Team Saskatchewan, at 4 over. Three strokes back, with a share of third, are Team British Columbia (+7) and Team Ontario (+7).

Additional information, including full scores from the Canadian Men’s Senior Championship can be here.