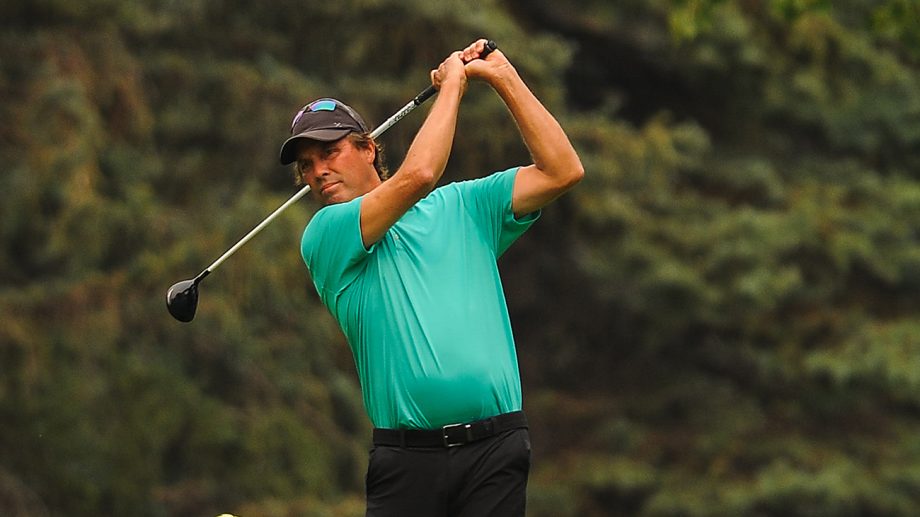 CALGARY, AB - AUGUST 14: Stephen Ames of Canada of tees off on the seventh hole during round two of the Shaw Charity Classic at Canyon Meadows Golf & Country Club on August 14, 2021 in Calgary, Alberta, Canada. (Photo by Derek Leung/Getty Images)
Associated Press

The 52-year-old Barron also had five birdies and a bogey at Canyon Meadows. He won the 2019 Dick’s Sporting Goods Open for his lone tour title.

“I played really nice today,” Barron said. “I hit the ball solid all day. I did make a bogey, but I still hit a good shot on the hole and I made bogey. I just didn’t get up-and-down. I’m fine where I’m at. I did look at the leaderboard going into 18. I wanted to be in the final group, so I think the only way, my only path to the final group was to make eagle, so I can’t believe I did it, That was pretty cool.”

Calgary resident Stephen Ames, Steve Flesch and first-round leader Billy Mayfair were a stroke back at 11 under. Ames and Flesch birdied the 18th for 65s, and Mayfair followed an opening 62 with a 67.

Canadian star Mike Weir, a stroke back after an opening 63, had a 70 to drop into a tie for eighth at 7 under. The 2003 Masters champion won the Insperity Invitational in early May in Texas for his lone senior title. In his last start, he tied for second in the U.S. Senior Open in Nebraska.

The tournament is the first the PGA Tour Champions or PGA Tour event in Canada since the Shaw Charity Classic in 2019.

Robert Allenby had a his second straight 71. He turned 50 last month and tied for 64th in the Senior British Open in his Champions debut.