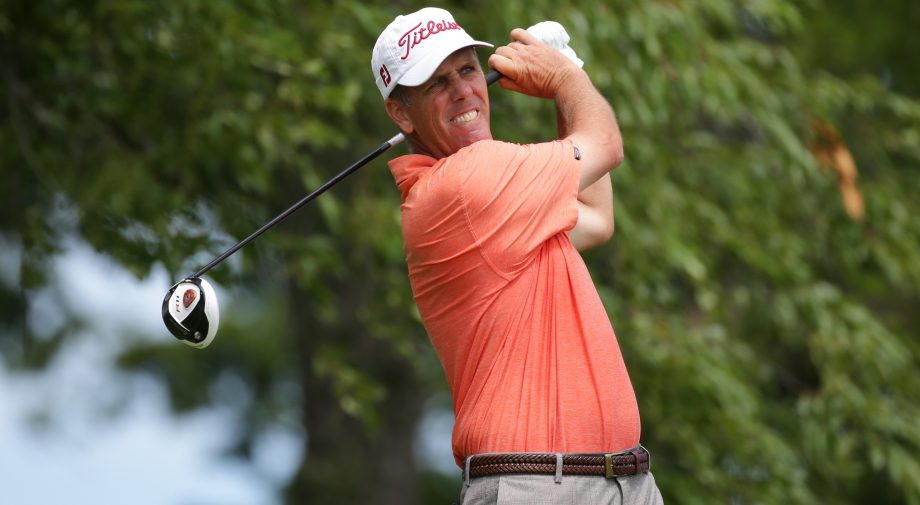 CARY, N.C. – Doug Garwood birdied seven of the final 11 holes for a 7-under 65 and the first-round lead Friday in the PGA Tour Champions’ SAS Championship.

Winless on the 50-and-over tour, the 53-year-old Garwood began the run with birdies on Nos. 9 and 10 and played the back nine at Prestonwood in 5-under 31 in the final regular-season event of the year.

“The thing I remember is I had four lip-outs, so felt like it should have been lower,” Garwood said. “But it was fun. … Obviously, when you shoot 7 under, everything’s working. I drove it well, hit the irons pretty good and I started making putts. Putter was probably the best part, made a lot of putts even with the lip-outs.”

He birdied only one of the four par 5s – the ninth.

“I tried to hit 3-wood second shot and I hit it up in the rough, which is a mistake, but I gouged it out about 30 feet and rolled that one right in the heart,” Garwood said.

Brad Faxon was a stroke back at 66, and Bernhard Langer and Larry Mize shot 67.

The top 72 players on the money list after the tournament – and one player in the top 10 in the event but outside the top 72 for the season – will get spots in the Charles Schwab Cup Playoffs opener – the PowerShares QQQ Championship at Sherwood in Thousand Oaks, California, on Oct. 28-30. Brian Henninger, 72nd with 172,853, shot a 72. Garwood is 37th with $483,745.

Faxon had seven birdies and one bogey.

“I think the key to my round, I missed the fairway on one and then left it pretty far short of the green and I had a really tough little pitch shot that I zipped up the fringe and got it to like an inch,” Faxon said. “Then I made a long putt for birdie on two and a really long putt for birdie on three and it was just kind of the whole day was setting the tone by the first three holes.”

“It was a great day, especially the putter was hot,” Langer said. “Putted extremely well today. Made a lot of par saves and some really good birdie putts as well. Never hit one stiff, a gimme birdie, didn’t have one of those, so all my birdies were putts.”