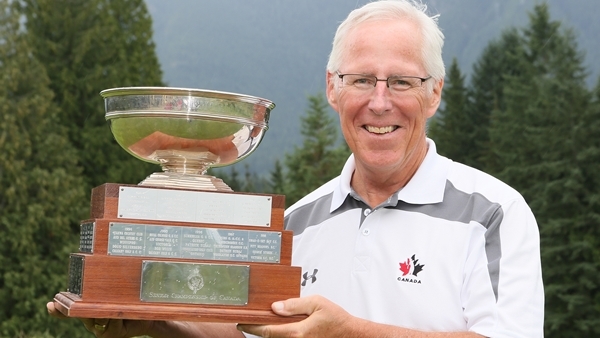 The win today at Capilano Golf and Country Club marks the sixth national golf title for Roxburgh, who won the Canadian Junior Boy’s Championship in 1970 and Canadian Amateur titles in 1972, 1974, 1982 and 1988.

The Canadian Golf Hall of Fame honoured member and 13-time British Columbia Amateur champion was ecstatic with the win, perhaps even more so because it came so close to home.

“It feels outstanding,” Roxburgh explained. “I had a good week here. It was fun, I had great playing partners and the course was outstanding. Each national championship is special, but it’s nice to win in Vancouver in front of my family, friends and clubmates from Marine Drive (Golf Club) who came out to support me.”

With the win, Roxburgh earns an exemption into the 2014 U.S. Senior Amateur Championship taking place September 13-18 at Big Canyon Country Club in Newport Beach, Calif. Surprisingly, the career amateur has played just one previous United States Golf Association (USGA) event during his 40 plus years in competitive golf. Roxburgh was tentative to confirm he’d be taking advantage of the exemption and head south to challenge for the Frederick L. Dold Trophy.

“I still need to talk it over with my wife,” added Roxburgh. “I did try about 10 days ago to qualify for it (US Senior Amateur) in Portland, but I didn’t make it. I’ve only played one other USGA event and it was many years ago – the U.S. Amateur – so it might be sort of fun. And, I hear the golf course is just outstanding. So, you’ll probably see another Canadian flag on the leaderboard… somewhere.”

Final results and a full field list can be found online here.