Dufner has another 65 and opens big lead at Memorial 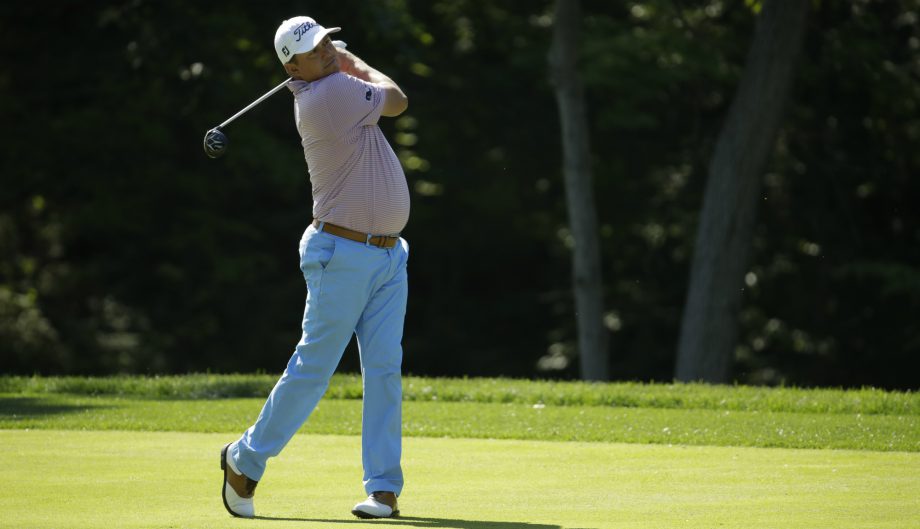 Jason Dufner wanted to put together more than just a few good rounds this week at the Memorial.

The first two put him in the record book.

Dufner holed out from 176 yards on the 18th hole for an eagle, and then added three more birdies on the front nine at Muirfield Village for another 7-under 65, giving him the 36-hole scoring record at the Memorial and a five-shot lead going into the weekend.

He was at 14-under 130, one shot better than the record previously held by Rickie Fowler (2010) and Scott Hoch (1987). Neither wound up winning the tournament.

Daniel Summerhays made bogey on his last hole and shot 69 to finish five shots behind Dufner. Fowler (66) was another shot behind.

Jordan Spieth was one shot out of the lead after the opening round. He already was eight shots back when he teed off, and all he managed was a 72. Spieth and Justin Thomas (71) were tied for fourth and eight shots behind.

“Duf is obviously in full control of the ball tee to green, and you’ve got to be making some putts, too,” Spieth said. “He had two fantastic days. He’s a major champion and a multiple PGA Tour winner, he’s going to be a tough guy to chase down. But again, playing with the lead on this golf course I imagine is going to be difficult.”

Dustin Johnson, the world’s No. 1 player, won’t have to chase him. Coming off a 78 _ and his first round without a birdie in nearly four years _ Johnson couldn’t get anything going and shot 74 to miss the cut by five shots.

At least he had time on his side. Johnson was headed up to Wisconsin for the weekend to see Erin Hills for the first time. His fiancee, Paulina Gretzky, is expecting their second child next week before he returns for his title defence in the U.S. Open.

Zach Johnson dug deep to make the cut on the number with four birdies on his last five holes. So did Tony Finau, who birdied his last three. They all have a long way to go to get to Dufner.

Grahaem DeLaet is the top Canadian, in 13th. The Weyburn, Sask., native shot a 67 and is 4 under. Nick Taylor of Abbotsford, B.C., is 1 over while Mackenzie Hughes of Dundas, Ont., is 2 over. Abbotsford’s Adam Hadwin and David Hearn of Brantford, Ont., both missed the cut.

The shot that got the most attention was Dufner’s 6-iron that he holed on No. 18 for his eagle. With a back left pin, the shot fit what he was trying to do, and he said the bonus was that it found the bottom of the cup.

The key to his great play was his putting, something Dufner rarely says. When asked about it at Kapalua to start the year, Dufner said: “I’ve been putting bad for 17 years. It’s tough to change.”

He managed with the help of a friend who sent him some research from a doctor who works with snipers in the Marines, and how they focus primarily on their breathing and their heartbeats. Dufner found his worst trait in putting was not having a consistent routine and getting too fast, almost as if he wanted to get it over with quickly.

“I think the one thing that also helps is it gives me something to think about other than my stroke or holing this putt or the situation I’m in,” Dufner said. “Subconsciously, I’m just putting. But I’m more focused on my breathing and I’m at with that.”

He said the goal presumably is to keep his heartbeat low, a real challenge for a guy who barely has a pulse in the first place.

“I’ve never had anybody measure it,” he said. “But I know that there’s been times with my putting that the thought process and my actions have felt like they’ve been sped up and too quick. And I’m trying to slow down and focus on that breathing. It’s been working. I’ve been using it all year. This is the first time I’ve said anything about it. Some days I’m better with it than others. You think it would be pretty easy to be consistent with that, but some days it’s not.”

Fowler started the tournament with a triple bogey on his second hole and he was 3 over through four holes when he turned it around Thursday for a 70. He was back out Friday morning and shot 66 and walked off the course the closest player to Dufner, even if it wasn’t very close.

Fowler and Dufner lived under the same roof during the winter months when Dufner came down to south Florida play some golf. They are good friends with personalities as different as hard rock and easy listening.

“We got to spend a decent amount of time together and that was fun,” Fowler said. “He’s one of a kind. He’s one of the best guys I know out here. … Because he’s fairly quiet on the course, you don’t get to really see who he is as a person. He’s one of the funniest guys out here, too. But fan-wise you wouldn’t really see that. The way he carries himself is pretty chill and mellow.”

He very quietly took only 130 shots over two days.

Dufner, who grew up in northern Ohio, missed the cut the first two times he played Muirfield Village. He skipped the next three chances at the Memorial, but didn’t have a choice in 2013 when he won the PGA Championship and earned a spot in the Presidents Cup that was held on the course Jack Nicklaus built.

Dufner spent that week asking his teammates how they played the course. Dufner posted a 3-1 record that week, and when he returned to the Memorial in 2014, he was at par or better over his next six rounds. He still doesn’t have a top 10, but he has figured something out.