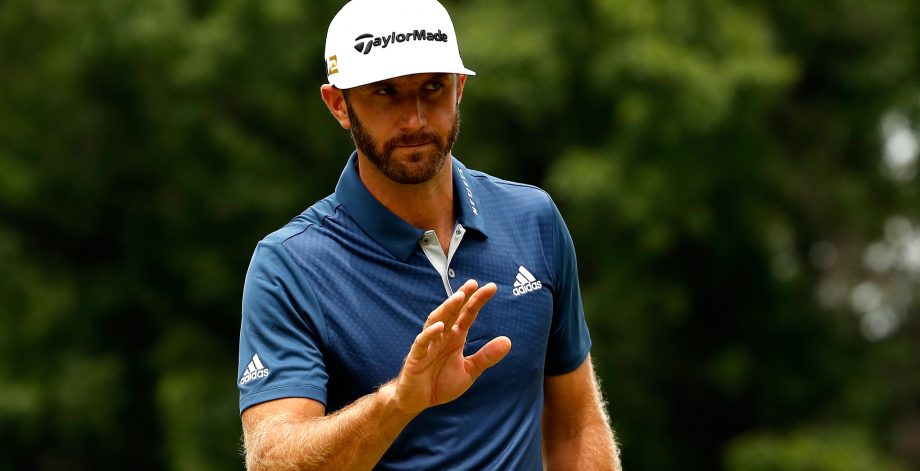 AKRON, Ohio – Dustin Johnson returned from celebrating his U.S. Open victory by taking down the world’s No. 1 player to win another World Golf Championship.

Johnson didn’t miss a beat from Oakmont to Firestone, powering and putting his way to a 4-under 66 on Sunday to win the Bridgestone Invitational for his second straight victory, making him the player to beat heading into the British Open in two weeks.

“This golf course is playing so tough, it’s not like I need to go out and shoot 63,” Johnson said. “You just try to hit it in the fairway and get to get it on the green and try to make some putts. I knew if I shot 4 or 5 under I’d have a chance.”

Jason Day, poised for his first victory in his adopted home state of Ohio, helped make it easy for Johnson.

Day had a one-shot lead when he missed a 4-foot par putt on the 15th hole, and then collapsed with a series of bad shots and bad choices. He tried to play it safe off the tee on the 655-yard 16th hole and hooked a 3-wood into the trees. He blasted through the branches and through the fairway, getting a good break when a young fan picked up his ball, allowing Day to drop it from behind a tree.

Then, he tried to squeeze a shot from 200 yards around the pond. It came up short and rode the collar of the bank into the water, leading to double bogey. Day didn’t hit a green in regulation over the final six holes, closed with a bogey and shot 72 to tie for third.

“Disappointed, but I’ve got to try and focus on what I did great this week, move on, and try and get better for the next one,” Day said.

Scott Piercy was a runner-up to Johnson for the second straight time. He narrowly missed birdie chances, and the birdie putt he made on the 18th gave him a 70 and allowed him to finish alone in second.

Johnson, who finished at 6-under 274, moved to a career-best No. 2 in the world by a fraction over Jordan Spieth.

Johnson, who won his third World Golf Championship, did his part. He showed plenty of rust the opening two days, coming off a week in The Bahamas when he celebrated his 32nd birthday and his first major championship. He hit his stride on the weekend with a 66-66 finish.

Johnson was three shots behind when he rolled in a 15-foot birdie putt on the 13th hole, and followed with a wedge into 8 feet for birdie on the next hole. Right when Day was getting into big trouble on the 16th, Johnson blasted a 9-iron out of the thick rough on the 17th to 15 feet and rolled in the birdie putt to take command.

Johnson now has 11 career victories in his nine years on the PGA Tour.

“I feel great,” he said. “I feel like my game is where it has been all year. I just haven’t been putting quite as well as I’d like. The last couple of weeks, I just putted a little better.”

He made it sound so simple, even as the back nine became so complicated.

Johnson ran into trouble himself on the 18th hole when he pulled his tee shot into the rough and clipped a branch on his punch shot, dropping into deeper rough. Instead of trying to play over a bunker, he pitched to the far collar of the green and lagged his putt to make sure he made nothing worse than bogey.

Unlike his U.S. Open victory, at least he knew the score.